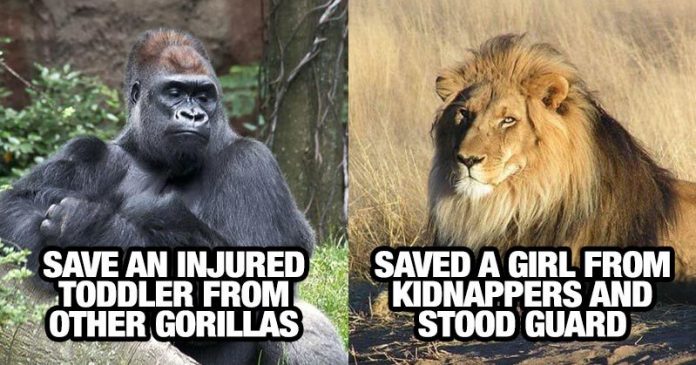 We have seen many videos of humans going to extreme lengths to save animals in danger, even wild animals. Humans are always there to rescue animals from domestic birds with broken wings to wild animals in painful labor.

There are also some stories of wild animals rescuing humans. According to some reports, there are some incidents where humans were in desperate need of help and could count only the instincts of an animal to survive. There are such situations that happened and the rescued humans have told some of the most mind-blowing stories.

Disclaimer: even though these stories are true, they do not mean that wild animals are safe, reliable, or friendly. So, always try to avoid them and be cautious in the events of a run-in.

A 12-year-old Ethiopian girl on her way to school was kidnapped by a group of seven men who tried to force her into marrying one of them in June 2005. The girl was there for over a week. They beat and assaulted her until her unlikely rescuers got wind of their evil actions. Three powerful lions came to rescue the girl and chased the men away and stood guard over the girl until the authorities came for her. The lions isolated the victim from the predators as they knew enough about violent assault. The girl was rescued and taken home without any harm from the wild beasts.

2. Wild beavers keep a boy warm, saving him from freezing to death

Rheal Guindon from Ontario, Canada had to stay back at the shores while his folks went into the ocean on a boat when they went on a fishing trip with his parents.  His parents’ boat capsized and they eventually drowned and this little boy had to watch it. He cried for hours but no help came, so he walked to a nearby town to get help. He couldn’t make it before sunset, and he found somewhere to sleep since he was hungry, scared, and worn out.

Rheal had a feel of warm fur grazing up to his skin, but he assumed it was a dog and cozied deeper into sleep. The boy discovered that he’d been kept warm by three wild beavers through the night when he get up in the morning. He was saved by three wild beavers where the temperatures would often dip below zero.

There are stories we have heard before about Dolphins. Todd Endris, a surfer from California was viciously attacked three times by a Great White shark in 2007. The shark tore him that his back’s skin on was peeled and his right leg was carved down to the bone. A pod of dolphins saved him by that stood up to the shark, causing it to leave the surfer alone. The dolphins were protecting him in a circle around him and guided him to the shore.

4. Seal saves a group of men from a shark attack

A British tourist in South Africa was closer to death after a shark wounded both of his legs and causing him to lose a lot of blood in 2011. The shark was ready to pounce again even though two other people dove into the water to help. Suddenly, a seal appeared and began circling the three men. So, the confused monster shark had to swim away. The seal protected the men and guided them to the shore.

An Australian seal has rescued Dudley Jones, the sole survivor of a boating accident that claimed the lives of two people in 1969. When Jones was on the verge of drowning, a seal came and pushed him to the shores on a reef.

69-year-old Robert Biggs from California was watching a mother bear and her cubs and was caught in a blitz attack by a mountain lion in 2012. The elderly man fought with a rock hammer to beat the beast. Suddenly the powerful mother bear caught the lion and flung it around by the neck. The mountain lion eventually ran off when the two wild animals brawled for a bit. Biggs survived the attack with a few abrasions.

7. A giant sea turtle swam a woman to safety on its back

According to the Philippine Navy, Candalaria, a 62-year-old woman was rescued by a sea turtle after surviving a shipwreck. The crew members aboard the ship reported that she was truly hanging onto the back of a giant sea turtle.

Villanueva said that she was struggling for something to hold when the turtle came along and she grabbed onto its shell. The animal swam with her on its back, even never stopping to dive down into the depths for food for two days. The turtle circled the ship three times before diving back down into the ocean to make sure she was okay when she was finally rescued by the sailors.

8. Shipwrecked fisherman rescued by a pod of dolphins and two whales

Ronnie Dabal, a Filipino fisherman was out working in the Puerto Princesa Bay when his boat got wrecked and he was thrown into the water in 2008. He had to struggle with the turbulent waves atop a Styrofoam raft for 24 hours. Once his energy was over and just when he was about to go under, a pod of 30 dolphins and two whales arrived there to help him. The two whales banded together and pushed his raft to safety at the beach of Barangay.

A 3-year-old boy tumbled down 18 feet into a gorilla enclosure at the Brookfield Zoo in Chicago in 1996. He had to face a severe head injury and at the same time was mauled by territorial gorillas in the enclosure. Binti Jua, a female Lowland Gorilla protected the babies and carried the child to safety.

Yang Yun, an aspiring whale trainer participated in a free-diving contest at China’s Polar Land Aquarium in 2009. Yun developed a cramp in her leg and was unable to continue swimming as the water turned out to be so cold. A Beluga whale, Mila suddenly appears to save her and grabbed her leg and pushed her to the surface.

19-year-old Kevin Hines had been planning to jump off San Francisco’s Golden Gate Bridge in 2006. But he hadn’t considered how the impact of the water would break his back or dislocate his spine. Even though he survived the instant injuries when he eventually made the 1280-meter plunge, he was unable to swim to the shore. A sea lion who acted as a buoy saved Hines holding him up until the authorities could come to his rescue.

During the 2008 tsunami in Thailand, this eight-year-old Amber Mason was separated from her family. A kind-hearted elephant and Amber’s friend, Ningnong had saved Amber. The elephant have carried the poor girl on its back as it ran for higher ground. Then it stopped and turned its powerful back to the wave at some point, shielding the girl from the intense force of the water.