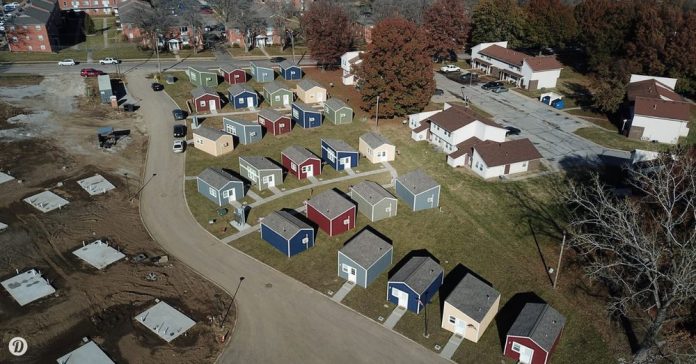 There are some veterans who served their country such as Leo Morris served in the Air Force, Karen Carter patrolled with the Coast Guard and Henry Owens enlisted in the Navy.

But they all shared another experience: homelessness.
Owens, who was homeless for eight years, said “You feel a sense of desperation, loneliness. I had no hope.” Today, they all are neighbors. They live in a tiny home in the Veterans’ Village in Kansas City, Missouri which was run by the Veterans Community Project.

A Veterans Village of tiny houses for homeless veterans in Kansas City, Missouri, and is expanding to other cities were built by nonprofit Veterans Community Project.

Former US Army Corporal Chris Stout lead this nonprofit which is the vision of a group of young veterans.

Stout struggled with his injury and PTSD being wounded in Afghanistan in 2005 and returning home. He got a job connecting vets to the services they needed while enjoying being around veterans. He was frustrated by the gaps and inefficiencies he saw and he used his own money to put homeless veterans up in hotel rooms.

Henry Owens didn’t hesitate to answer: “Blessed” when asked how he was doing in a recent interview.

Until recently, he was living on the streets of Kansas City, Missouri. He faced hard times to keep a job and lacking close family members or friends who could lend him a bed to sleep on, or even a couch.

He said, “My PTSD just kind of kicked in wholeheartedly. I was struggling and dealing with that, and that just kept me in a cycle of not being independent and taking care of myself.”

But today, he has a house in a brand new neighborhood, surrounded by a community of people who can understand what he’s been through.

The home is a mere 240 square feet and it doesn’t faze him.

He said. “I have everything I need.”

There are 13 formerly homeless veterans who have started new lives on a five-acre lot in Kansas City called Veterans Village, an initiative of the nonprofit Veterans Community Project. The organization also provides services to help the former service members get back on their feet besides tiny houses of 240 or 320 square feet.

Chris Stout is one of four Iraq and Afghanistan veterans who founded the organization said, “At least 60 percent of the people that we serve, we’re serving them because of a poor transition from the military.”

According to Stout, their original idea was to purchase an old building and convert it into a shared transitional living space for homeless veterans, similar to other types of shelters. But he was sold when someone told Stout about tiny houses in vogue a la the TV shows “Tiny House Hunters” and “Tiny House Nation.”

Stout said, the 240-square-foot homes are filled with a twin-sized bed, desk, kitchenette, bathroom and “everything you kind of need to live on your own,” likening it to a small studio apartment. The 320-square-foot models are for veterans with families. It can fit a queen-sized bed, sleeper sofa and a triple bunk bed.

He said “It was housing with dignity. It gave them their own space, a sense of security.”

Owens tried staying in shelters before finding out about Veterans Village. He had been sleeping in a park where his friend, also homeless, was shot and killed more recently and just days after Owens moved into his new home.

He said, “It actually saved my life.”

Veterans Community Project eventually plans to build a total of 49 homes on the Kansas City property with 13 more tiny houses currently under construction and with a community center that will house medical, dental and case management services. They are also planning to expand it in the St. Louis, Nashville and Denver areas.

Their efforts have inspired a group of high school students in Texas who recently took on a similar project.

An assistant principal at Summer Creek High School near Houston Al Segura said that he was scrolling through Facebook on a sleepless night in 2017 and happened across a video of a nonprofit building a tiny-home community for homeless veterans. Even though he can’t remember the name of the organization in the video, he remembers it was in Kansas City, and all other signs point to the Veterans Community Project.

He said that “The thought just came to me, ‘Wouldn’t it be neat if kids could do that?’”

Segura found another high school in the district on board. The architecture students in both schools started work on two tiny homes that they will donate to homeless veterans after months of planning.

Sarah Dalby, one of the student architects on the project at Kingwood Park High School said, “It’s really awesome to be able to use what I’ve learned in the classroom and be able to apply it to the real world and helping real people.”

The schools are planning to involve students in several departments such as art students to help decorate the inside, welding students to make grills for outside, and English students to write the veterans’ stories.

Dalby said, “Right now, it’s just two high schools, but we really want to expand that to the rest of the schools in our district, to our city, state and hopefully the country so that we have tiny home communities everywhere. We’re all doing that everywhere all over the country, the question that we’ve posed a lot is, ‘How many homeless will there be left?’”

By the end of the school year, each high school is planning to finish its tiny house. They just want to hand them over to a community partner to manage a village of tiny homes just as the one that inspired them.

‘Anybody can do this’

One Stout of Veterans Community Project is proud to have inspired.

He said, “For us, that’s what it’s all about, right? We want everybody to know anybody can do this.”

He said, “It just shows that VCP is a cornerstone in veteran homelessness. They have pretty much every avenue covered. We have a case manager we meet with every week. We talk just personal. We talk about transitioning into what we need to be. Projects like this is what’s needed.”

Owens now getting the help he always needed after the military. He has started his own lawn care business and is finally regaining pride in his service after years of feeling betrayed and frustrated by the way his career ended in 2007.

He said, “It was a struggle to say, ‘I’m a veteran.’” But now, “being around comrades that kind of understand the difficulties of adjustment to civilian life” has helped change that.

“You have neighbors who understand what you’ve been through, what you’re going through and you have that support to get you through. It’s a mind frame of knowing I can make it now.”

In 2019, Prellberg was awarded the Purple Heart with the help of Kansas Rep. Sharice Davids. He went out to dinner with some other wounded veterans after the ceremony and met some people from VCP and told him about their program. Prellberg was accepted and moved into one of the tiny houses in January.

He said, “I went from a place where I was couch surfing. And to have a place that’s your own is just enormously helpful.”

Meyer commented he is optimistic about Prellberg’s progress.

“He has become a leader in the community, welcoming new veterans that have just moved in and been an example in our recent Battle Buddy Program. Kyle and his case manager have been actively working through the red tape of increasing his disability percentage through the VA and exploring employment options in the near future.”

VCP is 100% funded by donations and relies heavily on local community partnerships and volunteers.

Meyer said, “We have more volunteers sometimes than I even know how to keep engaged because everybody wants to help. The volunteer labor isn’t just about cutting costs. It’s also about the community feeling like they own the projects too.”

Many cities around the country have contacted VCP about building villages in their areas. The first satellite VCP Village is building in Longmont, Colo., with plans, also underway to expand into Cincinnati, St. Louis, and Orlando, Fla.
Having a good relationship with local Veterans Affairs (VA) offices in each city is one of their expansion plans.

Meyer added, “Every place we go into, we truly want to establish that relationship because our entire intent is to kind of fill gaps in some of the services out there. We don’t want to compete with anybody. We don’t want to duplicate what the VA is doing.”