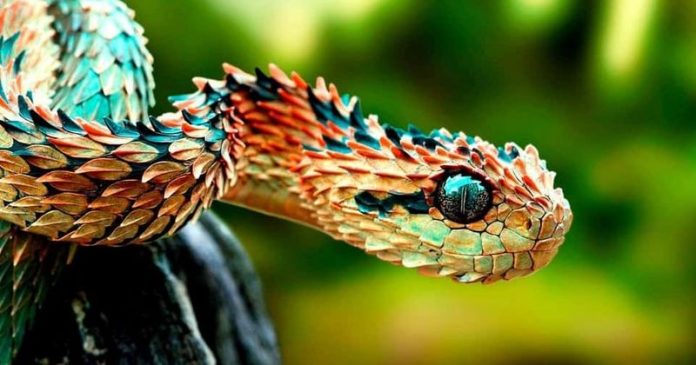 These Spiny bush vipers are venomous and natives of Africa. These nocturnal snakes’ scaly bodies are the same as the fire-breathing creatures we have seen in many fantasy movies.

It is really astounding to see how magical the nature we live in actually is as it makes us think if all that we thought was a figment of someone’s overactive imagination could have been real. A spiny bush viper looks like a flightless baby dragon at first glance. Their scaly bodies are just like the fire-breathing creatures we have seen in many a fantasy movie.

These tiny dragons are native to central Africa. You’ll love these vipers if you are a huge dragon nerd. Their scientific name is Atheris hispida and according to ThoughtCo it comes from the Greek words meaning hairy and tailed. They have a semblance of being miniature dragons with their pointy scaled body and their large eyes with vertically elliptical pupils. They are relatively small snakes and only grow up to 29 inches in length while belonging to the Reptilia class. These small snakes are dangerous because they are venomous and just like their fantastical versions are considered dangerous for breathing fire.

According to News Medical, it is mainly neurotoxic which means that a bush viper’s venom can cause damage to the brain or peripheral nervous system. The toxicity of individual specimens within the same species and subspecies varies based on several factors such as geographical region. INaturalist say that a bite from these snakes could be fatal and can even lead to severe hemorrhaging of internal organs. They can be commonly found in reeds and stalks as they can easily climb there. They are also be found lying on of flowers and terminal leaves.

These vipers are found in isolated places such as the rainforests, woodlands, swamps of Central and East Africa. Their prehensile tail allows them to hold onto branches or hang upside down. They eat animals like small mammals, like birds, lizards, and frogs. They ambush their prey by hanging from trees. They also hide in foliage or curl up into an S-shape to find their food. There’s no any information about their population, about their lifespan or how much they weigh, owing to their remote and nocturnal lifestyle.

A post shared by Invisible animals and things (@invisible_animals_and_things) on Apr 29, 2019 at 1:16pm PDT

The rainy season is their mating season and within six to seven months. The female gives birth to nine to 12 offspring with dark green and wavy stripes. They attain their adult coloration after a few months. They live discreet lives and hard to see. They could potentially even kill you if they bite you as they are venomous.