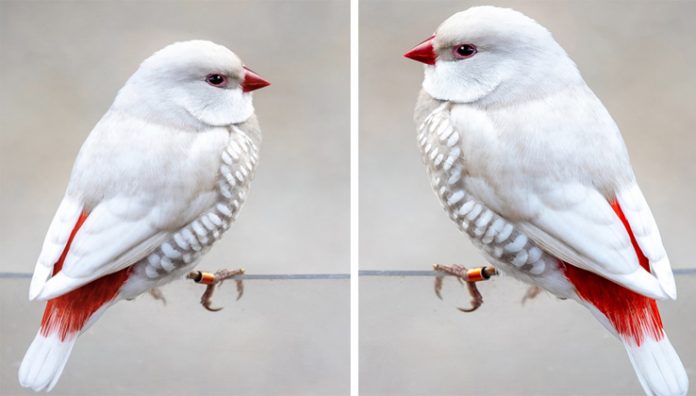 One of the most stunningly colored birds of the finch family is the Diamond Firetail. They have ash brown with crown on top of its body and, forehead, and neck grey. The under feathers are in white color with a crimson rump. A black band goes across its neck and down the flank to be dotted with white.

While the bill and eye-ring are coral, its legs and feet are dark greys. Even though sometimes smaller, the females are similar to the male. The juvenile Diamond Firetail has a black bill and duller color. They fly low and flocks travel in long lines. They are also called as the Diamond Finch or Java Sparrow.

The most experienced breeders can only reliably produce this variety of the Diamond Firetail (Stagonopleura guttata).

The Diamond Firetail is an Australian finch. It has bright red beak, sparkling black and while flanks and forthright personality and not a quiet little finch that go hide into the bushes. Firetails are not the most sociable bird with other species and some people don’t want to keep them for this reason.

Here’s What These Stately Little Birds Look Like In The Wild:

The Diamond Firetail (Stagonopleura guttata) is also known as the Diamond Sparrow. This Estrildid finch is endemic to Australia and can be found from the Eyre Peninsula of South Australia right through to the south-east of Queensland.  BirdLife International has been listed number of sites in three states as important for the species conservation including the Greater Blue Mountains in New South Wales and the Patho Plains in Victoria. It has been classified as ‘near threatened’ by the IUCN as the bird has suffered from a loss of habitat across its native areas.  Some major problems for the firetail are overgrazing, weed invasion, and the loss of plants that it relies on for food.

Its distinctive looks are one of the problems with the firetail as there is no real difference between male and female birds.  Even though people say that the females have duller colors, smaller skulls, and even a paler beak color they are not conclusive.  They have a silvery grey head color with a white throat, bright red eye-rings, and maroon red beak.  It has a black tail and a bright red rump while the flanks are black with white spots and the belly is also white.

Here are some mutations that have surfaced in the captive breeding population.

As Firetails can become lazy and prone to obesity if there isn’t much space to fly around, they can be kept in good-sized cages or flights. Even if they are relatively hardy birds they should not be subjected to the worst of the weather without heating.

These birds continue a strong pair bond and remain with each throughout their life.  They will cluster in groups of 30 or more birds outside the mating season, and they use a colony system during breeding. They roost in a nest and so that they always have access to one, even outside breeding season and also materials to line it with.

The firetails feed with seeding grasses and fresh greens such as kale, broccoli, lettuce, and weeds such as dandelions and chickweed.  They will enjoy millet spray and other treat seed. They need sprouted seeds for their nutritional benefits.  According to some sources they will benefit from live food such as mealworms or waxworms for their protein as well as to egg food. In order to have both good eggs and strong bones they need mineral block, cuttlefish, grit, or any similar product.

They breed between August and January in the wild and others will nest simply depending on the conditions. Birds need to be compatible to be successful so the best way to succeed is allowing them to pick each other from a group.

Males dance with a piece of grass in his beak, bobbing up and down, and singing to court the females. He may approach the hen and use a begging posture as a fledgling does and mating usually occurs in the nest.  They choose a nest that is near to the ground with dense cover or a nesting box or builds their own from grass, sisal, coconut fiber, and other similar materials.

The typical clutch is 5-6 eggs and after the 2nd egg is laid they are incubated for 13 days. The chicks remain in the nest for 21-26 days and then are weaned around a week later. Firetails don’t appreciate nest inspections and if disturbed they can abandon eggs and young.

Diamond firetails are known for their aggression. In generally, they live in a mixed aviary as long as there is enough room and they live with birds of a similar size, like grassfinches, zebra finches, or cutthroat finches. They can be aggressive with other birds that seem to threaten their nest when coming to breeding condition or when in the nest. They may also fight with others of their species or only one pair (the dominant one) will actually breed.  By watchoing them you can know if a bird is settling into an environment. You may want to consider a change if you see signs of aggression beyond chasing others away from the nest.

The aptly named Beautiful Firetail (Stagonopleura bella) is both beautiful & has a fiery tail!

They are the only finch species that occurs naturally in Tasmania

The diamond firetail is endemic to the southeast of Australia, ranging from the Carnarvon Ranges in Queensland to the Eyre Peninsula and Kangaroo Island in South Australia. They grow to 10-12 cm and weighs 17 grams, which is positively gargantuan when you compare it to the mini emu-wren, at just 4 grams.

One of three firetail finches from the genus Stagonopleura, are endemic to Australia.

Rhe beautiful firetail is also found throughout Tasmania while ranging from Newcastle to Kangaroo Island. Note that it’s the only finch species that occurs naturally on the island.

The bird with a fat little body, a wide red beak, and eyes rimmed in sky blue, and the most brilliant crimson tail is a striking species to spot in the wild:

It’s a tricky bird to track down as keeping to coastal scrublands and forests. The bird can be found near water.

Look how excited they all are:

Even though Australia’s firetail finches are not technically classified as threatened, they are declining. There are some serious threats such as things like habitat loss, feral cats, and other native birds such as the pied currawong .

Some active measures have been taken to ensure this species.