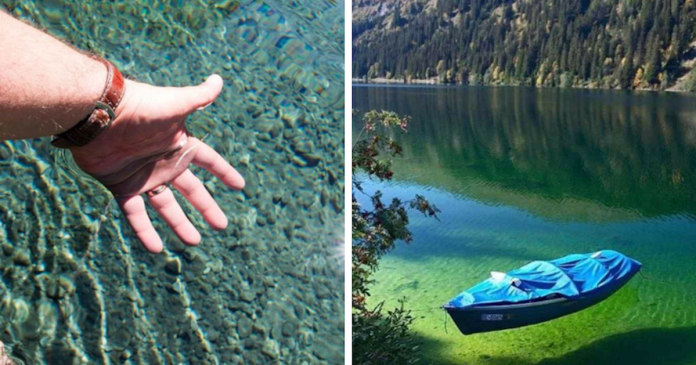 The clearest lake in the world is called Blue Lake, or Rotomairewhenua. Without any exaggeration it is the clearest one. It is also a world record holder for the clearest freshwater lake in the world. Blue Lake has a recorded visibility of up to 80 meters, which is more than 260 feet which is located in beautiful Nelson Lakes National Park in New Zealand. The water is clear as distilled water. After seeing the pictures you will want to travel to its location and take a swim in its pristine waters. But you can’t. Here are some beautiful pictures and you also can find out why exactly you can’t swim in these gorgeous waters.

The crystal clear waters are regarded as tapu or sacred by the local Māori iwi / tribe. Humans are not permitted to enter the lake due to this reason. As we pretty much destroy everything we touch this is a great decision they have taken.

Blue-violet hues that can be only seen in the very clearest natural waters characterize the Blue Lake. Even if the lake is spring fed from the neighboring glacial Lake Constance, the water passes through landslide debris that forms a dam between the two lakes.

According to Hydrologist Rob Merrilees, the potential for Blue Lake is optically outstanding and as similar to Te Waikoropupu. They realized that the visibility of Blue Lake actually exceeded that of Te Waikoropupu only on a visit in 2009. It was confirmed to be the new record holder after testing the waters.

There are nearby huts and approximately 700 people stay in those per year even if you cannot enter the lake.

The team that was in charge of running the tests on the lake did the testing with special permission as they understood its clarity.

It takes two-days to hike the lake from the park boundary. You can also get an aerial view. There are scenic flights available with Reid Helicopters.

The clarity of the lake is monitored to establish if there are any changes.

According to the New Zealand’s Department of Conservation the visitors should respect the waters by not washing themselves, or their clothes and dishes in the lake.

The area where the lake is located is home to the Rotoiti Nature Recovery Project. The project aims to revive populations of kiwi, along with other native birds and lizards.

The lake was traditionally used in tribal ceremonies to cleanse the bones and release the spirits of the dead long ago. And they could begin their journey to Hawaiki. The iwi named its waters as sacred. And it was used only for males and the lake Constance was used for females. Rotomairewhenua, its Māori name meaning “the lake of peaceful lands.”

As we all can see this lake is really amazing. If anybody around the world visits there they should not getting in it or cleaning any of their belongings. When time passing, this would definitely ruin the clarity of this beautiful lake. Blue Lake is a must see if you visit in New Zealand. You can have a helicopter tour even if you didn’t get the chance to stay at one of the huts available