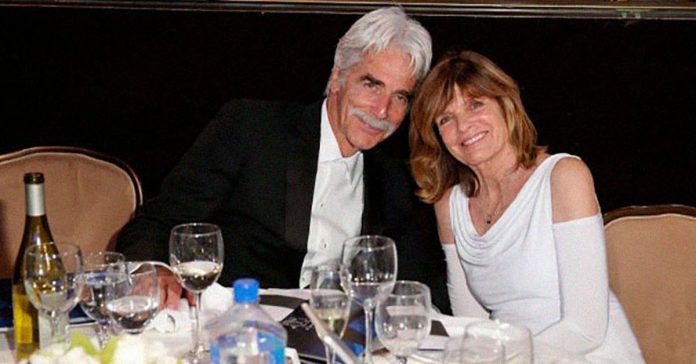 Hollywood relationships are not always successful. The paparazzi and fans are always looking for any trouble in the relationship. Some relationships are seemed to break up before they are even together. It not really a surprise when you consider the pressure that they are under with being in the public eye. You hear about a Hollywood couple that breaks all of the rules and sticks together every once in a while.

Sam Elliott and Katharine Ross are one of those Hollywood romances that just seem to be straight out of a storybook. This couple has been together for more than 40 years and they don’t want to stop it or slow down. These two are a couple worth emulating when you stop thinking about all of the other relationships that have fallen apart in the time that they have been together.

Elliott is 74 and Ross is 79. The couple already had established careers in Hollywood before they met on the set of The Legacy. In 1978 it was being filmed in London.

They were lovers in the movie and things began to happen.

Before 10 years prior when he was playing Butch Cassidy Elliott had crossed paths with Ross. As he was rather shy he didn’t approach her and they didn’t officially meet before. He admitted: “I didn’t dare try to talk to her then. She was the leading lady. I was a shadow on the wall, a glorified extra in a bar scene.”

Elliott is five years younger than Ross and when they first met she was already married to her fourth husband. He was a bachelor up until then and in 1984 they were married, about five years after she divorced her husband at the time. Chloe Rose is their only child together.

As they were very busy, it can be difficult to find the time to spend with each other but Elliott feels it is important for the relationship. As they were on their honeymoon in Hawaii, he missed his part in the Cher movie, Mask.

Ross called his agent and gets him back to try out for the role in time.

Chloe Rose, their daughter is now a singer and she posted a picture on Instagram saying: “My mom and I have a joke that we are always talking when pictures are taken.”

The couple is doing well together and they even act together. They starred in The Hero in 2017. Ross is the ex-wife of an aging film icon.

Those projects are good for the relationship. She said “Sometimes that’s easier than real life. You’re [sic] got a script. You’ve got a part. You’ve got your creative juices flowing together. It’s not about the dirty dishes in the sink or whether you’ve picked something up at the laundry…”

They don’t have time to stay together always, but they take life as it comes. “We have a common sensibility, but we also work at being together. You work past the s–t; you don’t walk away from it. That’s how relationships last.”

This is the family in Malibu, California

Elliott told the San Francisco Chronicle, “What makes a marriage work is a mutual love and a mutual respect. There are peaks and valleys like everything else, but you have to push on.”

Elliott was nominated for best supporting actor being in A Star Is Born.