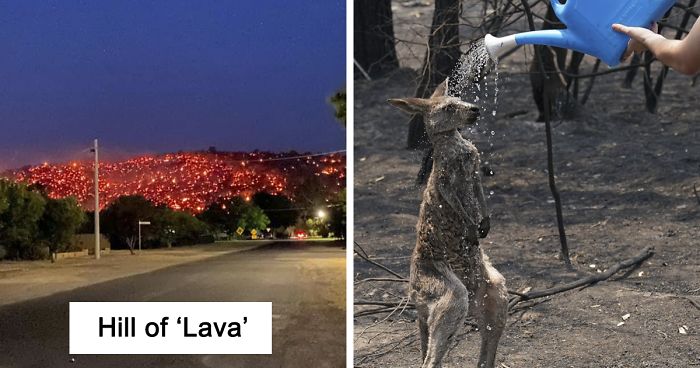 You’ve surely known about the wildfires currently going throughout Australia. So far, the fires have devastated about 14 million acres (21,875 square miles) of land and killed nearly half a billion animals. The transport minister in New South Wales, Andrew Constance said that it’s like an atomic bomb. No words can describe the situation in Australia. Here is a collection of shocking photos that capture the horrors many Australians are currently going through.

To Our Nation’s True Heroes – The Thousands Of Firefighters Currently Battling Fires Across Our Country, We Thank You From The Bottom Of Our Hearts

Quite Literally Watching Your World Burn

Volunteers from all over the country help to fight the fires as there’s not enough manpower to fight the raging wildfires in Australia. Everyone is doing their best to fight the frontline fires and to help the people who had lost their homes. You can donate towards relief efforts like the Red Cross, St Vincent de Paul Society, and the Trustee for NSW Rural Fire Service & Brigades Donations Fund if you would like to help too.

Ben Jameson, a resident of Gold Coast said there’s a whole lot of division when it comes to who to blame in a recent interview with Bored Panda. Because of these heavy fires the man’s housemate lost two family members along with 80% of the houses in that community. Ben said, “People are pretty angry, man. Angry at the leadership, because there is none. We have a prime minister who is so disconnected; he goes to the site of where there has been such devastating loss, to do what? Well the members of the community are there. But does he want to talk to them? No! He literally walks away from anyone that has something to say, anything.”

Since The Fire Has Passed Through Mallacoota This Amazing, Selfless Young Guy Has Been Out Searching For Injured Wildlife. This Is One Of 7 Koalas He’s Saved So Far

Neighbours Helping Out Strangers During The Australian Bushfires. Everything Helps And It All Adds Up!

Ben said,“People are pleading, crying, desperately wanting to know what. Is going to do, where the help is, where is the support, where is the funding for the firefighters, where is the funding and support for the volunteer firefighters… So many of these firefighters are volunteers. You would think in a country such as ours, where we have had bushfires become a part of our identity almost, that we would have invested properly and have adequate equipment and sufficiently trained firefighters and enough of them. But no, instead against all advice from weather services about drought and rainfall conditions, and advice from fire services about the severity of predicted bushfire seasons, the government chose to cut funding to fire services, up to 39 million dollars. But who cares now. The people have been able to muster near that sum themselves. It’s almost as if we don’t need a government. The people are more than capable, and the people know.”

Ben says it’s actually punishable to protest about the climate in Australia to make matters worse. “How dystopian is this reality? I thought this was the future. But we can’t even talk about climate change. We are well in the grip of a changing climate and the consequences now are irreversible. We are well and truly [effed]. This that your seeing on the news now. This is now going to be the norm. Our bushfires in El Niño years are going to look like this.”

I’m So Proud Of My Country, Our Volunteer Firefighters Are Legends In Their Own Category

Kangaroo Is Drenched In Water After Approaching A Human For Help

Ben continued, “And don’t get me wrong. This won’t be every year. Sure we get bushfires. But there are a lot of serious global changes happening and lots of meteorological drivers. El Niño means we have such low rainfall at the moment. Drought conditions in so many towns lots of towns have run out of water. Cattle are dying, crops are dying. Sure, when La Niña years come around in their 4-ish year cycle we will experience more rain. But again, the severity of that rain will also be increased, our floods are going to get worse, our cyclones are going to get worse.”

“We’re a big country so we experience a lot of extreme weather from north, south, east, and west. But there have been flames 80m tall, the wind just blows it and blows it and it’s just unstoppable. The heat from these fires extends so far that firefighters cannot get close enough to put water anywhere near the flame…. it is out of control. They can’t be controlled. You’ve probably gathered that even I’m pretty angry about it.”

Ben is really angry that Australian government treat this situation as a joke. “Make no mistake, they do not speak for the majority of the Australian people. At least the people that I know. My friends and family have shown so much support and strength and resilience. Coming together, donating money where possible, helping each other out, going to communities to help clean up. Like, just regular people. Not emergency services or defense force. Just normal people.”

This Fire Fighter (And All Ff’s) Saving The People, Animals, And Homes In Australia

After Spotting A Koala Crossing A Road Amongst The Flames A Woman Rushed To The Animal’s Aid, Wrapping It In Her Shirt And Pouring Water Over It

“There’s a number floating around that’s you guys have probably seen. A university in Sydney estimates that near 500 million animals have been killed by the fires since September. Half a billion. Half an [effing] billion. What the [eff]? Like so many of our animals, wombats, koalas, crocs, platypus, etc. are endangered or threatened species. I don’t think people, (especially, people in government) understand the scale of that number. I’m not sure if our countries ecosystem and biosphere will recover from this, I really don’t.”

Ben said, “As far as what’s being done to stop the fires, well, these firefighters and volunteer firefighters are battling a literal Hell. A relentless unstoppable Hell. A heat that’s so intense yet they are still so far away from flames.”

Cerene Lowe, Ben’s housemate has started a fundraiser and to raised over 60,000 Australian dollars for the community that burned down earlier in December.

“This is a picture of my Dad getting 5 mins sleep on our front lawn, while my brother keeps watch over the fire burning at the top of our farm after he finished his 10th 12 hr+ day in a row fighting voluntarily in the community with the RFS NSW.

My family have been fighting these fires on our farm and our community nonstop for over a month. They are tired, they are sore, and they are running out of resources.

Today I heard my Dad cry, “Jen I have never seen anything like this, it’s never ending”

We still have over 50 days of summer left we aren’t even half way and there is currently no end in sight.

Please don’t become numb to what’s happening. Don’t get caught up in the negativity, the politics, the facebook news, the drama!

Australia is on fire and there are brave people all over the country VOLUNTARILY fighting day in, day out to keep our lives and homes safe.

These firefighters need our support more than ever!

This should be our one and only focus.

To all of the people helping directly and indirectly around the country Thank you! To everyone else don’t forget to donate what you can to your charity of choice, every little bit will help! This is far from over!

To my family, I can not express how proud I am of you all! I love you and am forever thankful

Amazingly Surreal Photo Of The Bush Fire In Australia

Australian Hillside Glows Like Lava After Being Consumed By Bushfire

Balmattum hill is really glowing tonight, but not as much as all of our incredible & selfless emergency services. Thank you

3D “Visualisation” Of The Fires In Australia, Made From Nasa Satellite Data

Hell Opens Up In Australia. Thoughts Go Out To Our Brave Fire Fighters

I finally have 48 hours where I’m not permitted on a fireground. It’s bliss. My body isn’t coping with the comedown though. Headache, nausea, shakes.”

In Australia After A Fire

No Filters. Australia Is Red From Wildfires

My Son Is 1 Month Old, He’s Never Breathed Fresh Air In His Life

How Big The Fires Are

A Picture One Of The Local Postmen Took From His Front Yard. This Was In Forster

Do You See This? This Is Our World. 4000 People Are Currently Sheltering From The Devastating Fires In Australia On A Beach. Photos Taken In Mallacoota In Victoria

The Fires From Australia Are So Massive That We Our Skies In New Zealand Have Turned Yellow (1,600 Miles Away)

This Is What My City Melbourne Looks Like Right Now !!! The Air Quality Here Is Terrible

This Is A Pyrocumulus Cloud Produced By Smoke From The Australian Bushfires. It’s 12km High. It Produces Its Own Thunderstorms, Fire Tornadoes And 100km/H Winds

One Of The Hundred Of Homes Destroyed By The Australian Fires

Over A 1000 People Forced Onto A Beach By Out Of Control Fires. They Are Surrounded With No Escape Except To Swim

Australia Is One Of The First Countries To Ring In 2020, Here Is What We Are Waking Up To On The Last Day Of This Decade. Happy New Year.

Yesterday Was One Crazy Day. I Helped Defend Friends Property From The Fire At Nth Durras

A Picture Of The Fires Burning In Australia Right Now. It Looks Like Hell

Evacuation On The Beach

No Filter. A Motel In Nsw Australia In Middle Of The Day