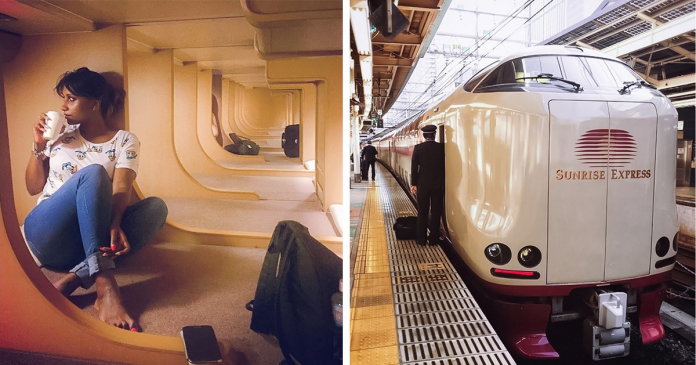 There was a great growth of Japan’s economy in the 1960s. In 1964, railways including high-speed rail lines were opened as part of this growth. Many express trains and overnight trains became very popular in the country during this time. After some time, these sleeper trains were overshadowed by bullet trains and domestic air routes so their popularity decreased after the 70s.

Trains depart Tokyo at 10 pm and arrive at their destinations at 7:27 am (Takamatsu) and 9.58 am (Izumoshi). Travelers can save the expenses of a night in a hotel by taking this train.

The passengers have private cabins that are called “nobi nobi” which invite people to lie down during the ride instead of regular seating on the train.

Passengers can use a shower for 6 minutes after buying a token. However, there is a limited supply of these tokens. So, if anyone wants to use the shower during their trip, they need to buy one to buy one early.

There are toilets, vending machines, and lounges in the train.

Now they are trying to attract new customers with their luxury sleeper trains that gave five-star lounges with actual fireplaces and also menus devised by Michelin-starred chefs. A trip on one of these can set you back up to $10,000.