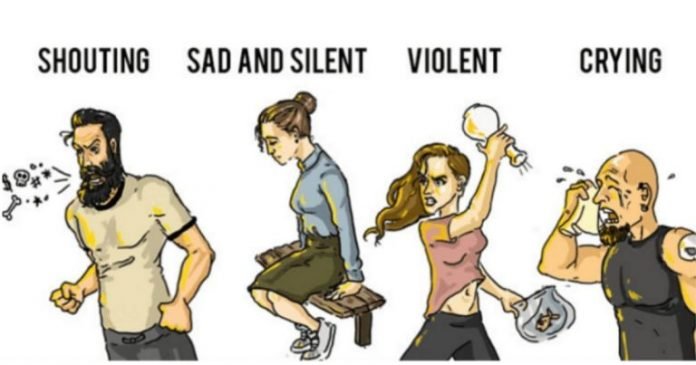 We deal with anger in our day to day life. People get angry with the prevailing status of mind or under the situation with a fair reason or not. But, this emotion should be managed properly in most cases. Anger leaves us feeling dissatisfied, misunderstood, guilty, or even more frustrated. Anger is the same for everyone, but the reaction to it may differ. So the way of reacting to anger has lot to say about the personality that someone has.

Some people speak harshly and yell when they’re angry. It means that they feel misunderstood and they want other people to think or know about what’s on his mind. They may be wrong about the incident, but they think that words getting power than the silence and can win the argument by shouting to others. But in people are not listening to the yeller as they think that it is not worth to backfire or defense. They don’t care about the feelings of getting hurt by others.

There are some people that are out of control when they got angry. They don’t think twice to throw some valuable things or break goods. These type of people believe that he or she is superior and deserves to be treated better than them. Their lives could be ended with a lot of regrets, if they don’t try on proper anger management.

Some people cry when they got angry. They are helpless in such moments. They show their pain through tears and they let their sad come out from the body. Even though they believe that they treated in disrespectful and unjustifiable, they are mature enough to hold back the pain. Even if many believe that crying over a situation show the weakness, that’s the best way to repair the relationship than yelling or violence.