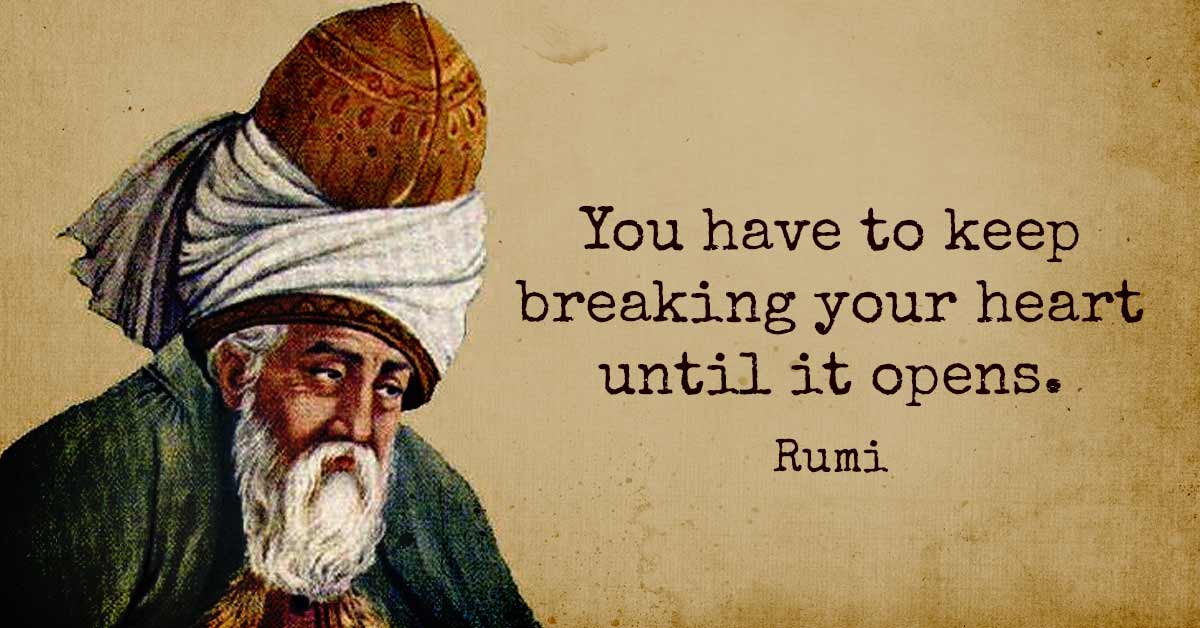 Jalal ad-Din Muhammad Rumi was a Persian poet, who lived in the 13th century AD.

He sang to the divine power of love throughout his life. Rumi was an Islamic dervish and a Sufi mystic and he earned him a place among the titans of human thought with his eloquence and wisdom.

Please read the powerful quotes below, as they are full of so much love and wisdom, if you haven’t read a line by Rumi before. Number of great artists including great Bengali revolutionary poet Nazrul has inspired throughout history, by Rumi’s verse.

His 37th birthday was the turning point in Rumi’s life, when the pious and righteous religion teacher met a wandering dervish by the name of Shams Tabrizi. Tabrizi became Rumi’s spiritual guide as they spent a total of three years together.

Then, all of a sudden, the holy man disappeared as quickly as he’d entered Rumi’s life.

We never know what happen to him; whether Tabrizi was murdered by one of Rumi’s sons, or he just moved on to find another lost soul in need of guidance. Rumi managed to convert his grievance into some of the finest verse the world had ever known even though he was devastated by the loss of his mentor.

Nature, the power of love, the pain caused by the loss of one’s partner and friend, etc are the recurring motifs in Rumi’s poetry.

The quotes you are going to read below will make you rest assured that God loves you and that love’s going to save the world!

The minute I heard my first love story,
I started looking for you, not knowing
how blind that was.
Lovers don’t finally meet somewhere.
They’re in each other all along

Your task is not to seek for love, but merely to seek and find all the barriers within yourself that you have built against it. – Rumi

Reason is powerless in the expression of love. – Rumi

Your heart is the size of an ocean. Go find yourself in its hidden depths. – Rumi

Love is the bridge between you and everything. – Rumi

Close your eyes, fall in love, stay there. – Rumi

If light is in your heart, you will find your way home. – Rumi

This is a subtle truth. Whatever you love you are. – Rumi

What is planted in each person’s soul will sprout. -Rumi

A thousand half-loves must be forsaken to take one whole heart home. – Rumi

I was dead, then alive.
Weeping, then laughing.
The power of love came into me,
and I became fierce like a lion,
then tender like the evening star.

Gamble everything for love, if you’re a true human being – Rumi

Only from the heart can you touch the sky. – Rumi