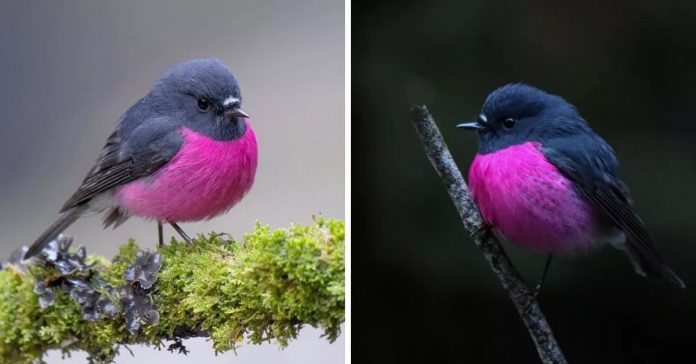 There is a lot of amazing creatures in Australia. You may think that no way that these types of creatures exist in real life. You’ll mistake that it is edited if you see this amazing robin bird because of this birds’ round pink color body. But this pink robin bird can be found in Australia for real.

The focus shifted on more recognizable animals such as koalas, kangaroos, or wombats since last September, due to the raging fires. We couldn’t even find many statistics about how these amazing and vibrant bird species have been affected by the fires.

The Pink Robin It’s Just So Round!

It’s Hard To Estimate Losses, Until The Fires Are All Out And The Birds That Escaped Return.

They choose dense vegetation of eucalyptus forests and temperate rainforests to nest and breed. So for sure, there was some damage to their habitats has happened. They are classified by the males’ blackheads, a white patch above their beaks, and their incredible belly.

Female ones are more of an olive-brown and they have only the slightest pink tint to their bellies. BirdLife Australia describes them as a “Small tubby bird” as they have their little round bodies.

This amazing bord to the worldwide audience was brought by an Instagram photographer @ambikangela . So you can see more of their amazing Australian wildlife photos on Instagram.

Pink Robins Are Classified By The Males’ Black Heads, White Patch Above Their Beaks And That Incredible Belly.

These birds can be seen on the island of Tasmania, King and Flinders Islands, and the wetter parts of Victoria and southeastern New South Wales. This gives the species a massive range of over 20,000 km2. They like to live in temperate forests or a subtropical or tropical moist lowland forest.  The one pre-requisite seems to be that its nesting place must be damp.

The pink robin needs Moss thrives in damp places for its nest which it will make in a deep cup shape. They add feathers and they use spider webs as a binding material.  They also use fine grass and fern as a lining on to which a clutch of three or four eggs is laid. The nest can be seen in the fork of a tree. The robins swoop down and catch insects on the ground or in low bushes from this vantage point.

The pink robin (Petroica rodinogaster) is a plump little bird that weighs just 10g which is endemic to the dense, temperate and tropical forests of southeastern Australia. The species displays striking sexual dimorphism which means only the males are decorated in that delicious candy hue, framed by a smoky black throat, head, and back and the plumage of the females is far more subdued.

It cannot be identified how the members of Petroicidae relate to each other. The European robins belong to a family of ‘Old World flycatchers’, Muscicapidae.

Ornithologists who traveled to Australia at the time of European settlement named the Australian robins after European robins and decided to call them robins too, despite fundamental genetic and morphological differences between them.

The pink robin (Petroica rodinogaster) was named with just a little pre-Victorian chauvinism aside Alliteration. A Belgian naturalist Auguste Drapiez first described it in 1819.  But as the pink robin is sexually dimorphic, nomenclature only describes half the species.  The female of the species has a drab grey-brown plumage while the male does have a pink breast. Despite the unlikelihood of it being related to the European variety, Drapiez decided to call it a robin too.