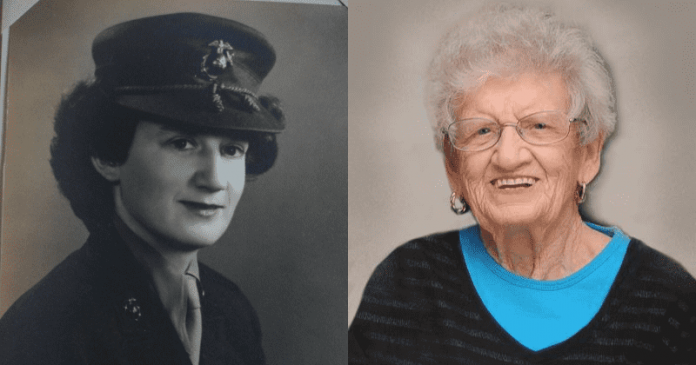 Dot Cole enlisted to join the Marines just after the attack on Pearl Harbor in 1941 at the age of 29.

Semper Fi Dorothy Cole is America’s oldest living Marine and she just turned 107 years old in September. Cole was fondly called Dot and she was born on September 19, 1913, in Warren, Pennsylvania. According to Fox6now, in 1941, she soon joined the Marines after the attack on Pearl Harbor. Considering women back then were forced to fulfill arcane gender stereotype, she was quite the trailblazer too. Cole said, “Everyone was out doing something. Women helping the Red Cross or even in churches, they were knitting things. So I decided that I wanted to do something and I would go into the Marine Corps.”

Happy 107th Birthday to Dot Cole! Sgt. Cole, of Kannapolis, is the oldest living U.S. Marine in the United States. She joined the Marines in 1943 during WW II. She completed her training at Camp Lejeune and was then stationed at Quantico primarily in an administrative role. pic.twitter.com/mHZGMPNIxO

So, she did. She had to complete her training at Camp Lejeune first, and later she was stationed at Quantico, in an administrative role. During WWII, women were not welcome to join the Marine Corps and things changed in February 1943 and as per the National WWII Museum, the first women were allowed to sign up. As people tried to come up with “catchy” names for Cole and her other women members in the Marines, they were subjected to sexism. The museum said, “Attempts were made to come up with a cute, catchy name for women in the Corps, with suggestions such as ‘Glamarines,’ ‘Dainty Devil-Dogs,’ and ‘Sub-Marines’ being a few.” Major General Thomas Holcomb, Commandant of the Corps was completely against the idea of nicknames and they were given the name Marines. He reportedly said in response, “They don’t have a nickname and they don’t need one…They inherit the traditions of Marines. They are Marines.”

Join us in wishing a very special birthday to the oldest living Marine, Dorothy (Schmidt) Cole, as she turns 107 today! pic.twitter.com/LtlTWRmxo4

Cole said she had planned to be part of the Navy and she even took flying lessons before joining the Marines, but to no avail according to Independent Tribune. She said in a light-hearted statement to the publication: “Originally I had chosen the Navy, but they said I was too short. So I decided to go with the Marines. I even took flying lessons of about 200 hours, thinking it would impress the Marines. But it didn’t. They put me behind a typewriter instead of an airplane.” The surreal moment when she heard the war was over from her partner, Wiley Cole: “Well, it was 75 years ago, but I remember it was hard to get the news and details of what was happening because we just didn’t have the news like we have today. It was through letters that I got all the news. I received letters from my future husband, who was in the Navy, and was on the USS Hornet. He wrote and told me that all the military forces came together to attack Japan. Many ships were hit, and lots of fighting. So when we heard the war was over, everyone was very happy.” Cole and Wiley got married in San Francisco upon her return to civilian life. Later they got jobs at Ames Research in Silicon Valley, which later became NASA.

Oldest living Marine turns 107 – her secret to living a long life – “be kind to one another, love God and follow his commandments, eat lots of chocolate, and have your dinner with a glass of red wine.” Semper Fi Dot Cole https://t.co/kfWawE02lg

Happy 107th Birthday to Dot Cole! Sgt. Cole, of Kannapolis, is the oldest living U.S. Marine in the United States. She joined the Marines in 1943 during WW II. She completed her training at Camp Lejeune and was then stationed at Quantico primarily in an administrative role. pic.twitter.com/mHZGMPNIxO

The trend Cole and her peers set over seven decades ago continue to be followed. According to the reports of the Women Marines Association from April this year, over 8.4% of the 185,000 Marines in the Corps are women.