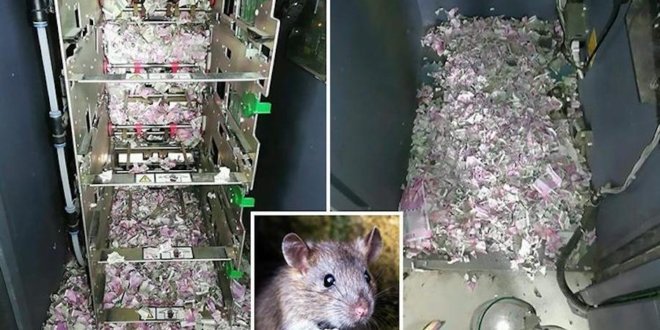 The only phrase to describe the world we live in is “stranger by the minute.” There have been many crazy things happening in this place and it was proved to everyone who walks down the road on a day-to-day basis.

Everyone hears or sees something new that becomes a story for others.

Here is a story for you from India, but it’s not a story about saints and wisdom and yoga.

This is a story of an ATM with a very special guest, a rat.

This has happened in the town of Tinsukia, Assam, North-East India.

In a world, where everything is depending on money, a measly rat has evaded security and enters an ATM vestibule, invade the teller machine and chew up nearly $18k.

Reuters said that the rat chewed up something around 12 lakh rupees causing the ATM to be out of order. There were so many technical complaints about not dispensing money for more than 12 days.

Cash still plays a very crucial role in the economy with small towns like Tinsukia, despite the government’s attempts at digitizing money and transactions.

People found the shredded confetti of notes after the machine was opened up.

Only poetic and fablesque can bring justice for this. Life means, the human condition which full of greed and running after money in this proverbial rat-race.

A fable of Aesopian standards itself, it ended on a moral note too: after devouring a multitude of notes, the poor rat died inside the teller machine itself. The corpse was already half-withered when taken out.

You can take a moral lesson from it to stop running after money.

The Connection Between Verbal Abuse and Anxiety Everyone Ignores