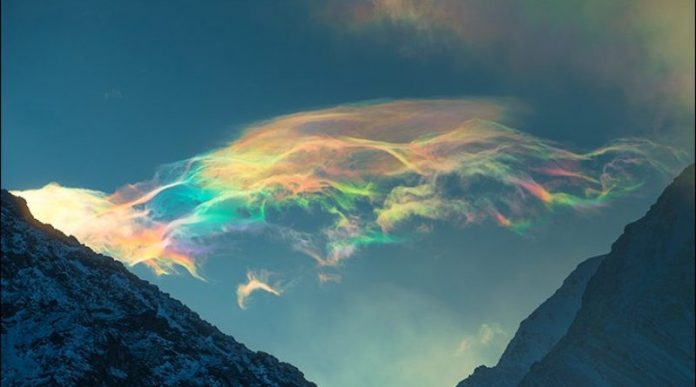 Russian photographer Svetlana Kazina quit her job in the city and moved her family to a hut in a mountain village near the border of Kazakhstan over twenty years ago as she has a deep love of nature. She got the chance to hone her craft and spend time surrounded by the awe-inspiring environment here. She loved to photograph in Siberia’s highest peak, Belukha Mountain. She captured a stunning photo of iridescent clouds hovering at the summit on a recent winter day.

It rises up 4,500 meters and is situated within the Altai Mountains which are named as a sacred mountain by locals. But arriving at Belukha Mountain is a difficult task. It took one day by car and two days on foot to reach the Ak-Kem valley. It takes another day to reach the base of the mountain. Kazina was accompanied by scientists and meteorologists conducting research during her time on the mountain.

She awoke one morning to a spectacular sight. The appearance of iridescent clouds was due to the dry, frosty conditions, coupled with high winds. These rainbow colors often appear when clouds are close to the sun and the moon nestled between the eastern and western peaks. Kazina was prepared as they often occur at Belukha Mountain.

Even though the irisation is easy to see with the naked eye, as long as the sun isn’t too strong, it can be difficult to capture on camera. Kazina aimed her camera at the dazzling rainbow clouds in the sky and snapped away by a polarizing filter and tripod. Each cloud was from the multi-colored cotton candy to giant soap bubbles in the sky. They needed to move to the next meteorological station while Kazina’s time observing the clouds was brief and anyhow she was able to capture an incredible portfolio of images.

When Light Scatters Through Small Water Droplets Or Ice In Clouds Near The Sun, Irisation Is Caused.

This incident mostly takes place in higher altitudes such as Scandinavia, Iceland, Alaska, and Northern Canada.

Svetlana has seen and captured the rare phenomenon early in the morning.

‘I pictured this beauty over Siberia’s highest peak, Belukha, early in the morning.’

‘Rainbow clouds are a rare optical phenomenon when thin clouds close to the Sun change to spectral colors.

‘The clouds in my photos are so thin that they look more like lace.

The wind at this height was so strong that the cloud ‘lace’ changed every second.’

The Altai Mountains in southern Siberia include some of Russia’s most stunning scenery.

“When the Sun is in the right position and…hidden from direct view, these thin clouds can be seen significantly diffracting sunlight in a nearly coherent manner… with different colors being deflected by different amounts.”

“Therefore, different colors will come to the observer from slightly different directions. Many clouds start with uniform regions that could show iridescence. But [they] quickly become too thick, too mixed, or too angularly far from the Sun to exhibit striking colors.”

There are some of Russia’s most stunning sceneries in the Altai Mountains in southern Siberia.

The mountain range attracts thousands of tourists from all over the world as it is really amazing.