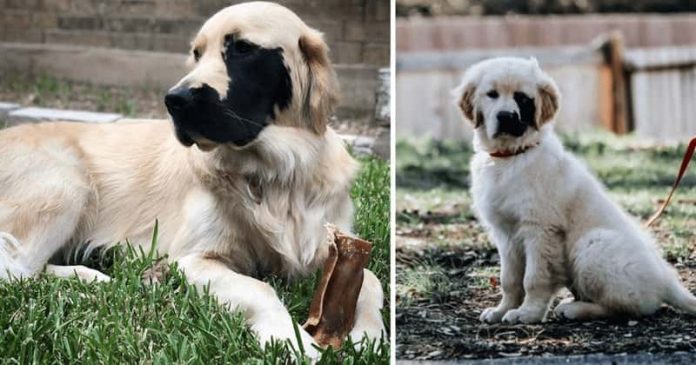 There are some of us that are born with a little something extra in the form of a birthmark while every creature on earth is precious. A birthmark can be in a place that no one would ever see if we didn’t point it out or it also can be visible. Not only human beings can get a birthmark, but other animals can also as well, such as dogs and cats. Enzo has a rare condition called pigmented somatic cell mutation. The gorgeous Golden Retriever doesn’t cause any health issues with this condition, but it makes him look very unique. So, people just can’t get enough of him.

Enzo is having a black mark across his face, and his owner, Ella Castro, explained. “Golden retrievers are born with a base black coat, with a ‘modifier gene’ that turns them golden. Almost every dog has this modifier. Enzo has a little stumble in his DNA that erased it on that one part of his face.” How fascinating is that? His Instagram account describes him as “English Cream with a lil Freckle.” The profile goes on to say that Enzo loves naps, stealing socks, long walks, kisses and that he’s a “fuzzy snuggler.”

Lorenzo deMedici Splotch Viola is Enzo’s full name. He’s super special and gorgeous and unique as this breed of dog, Golden Retriever, typically has an even coat of fur. According to his family Enzo is a “very friendly dog,” and indeed, Golden Retrievers are one of the most popular dog breeds in the U.S. the dog has no effect on its health or behavior in any way when it has this condition. It seem like the mutation occurred during the development of the embryo and it has caused patches of another color on Enzo.

Scientists also wonder why pigment mutations appear in Golden and Labrador Retrievers more than other breeds. They also think that it’s possible that the recessive red gene is particularly prone to mutation and unstable. One cell that helps to mutate early in development, causes all the cells that descend from that one to be affected. These patches have a different genotype to the rest of the dog.