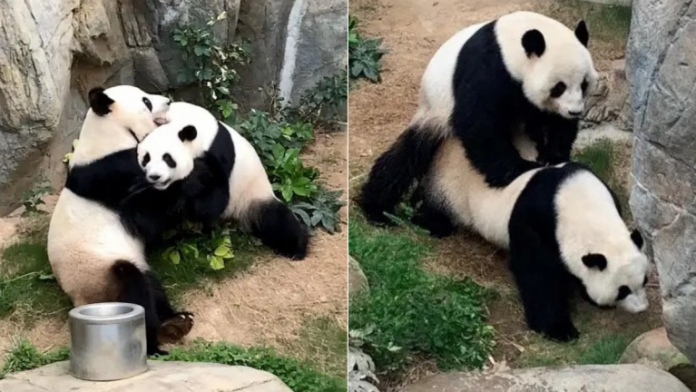 Our lives have dramatically changed due to the coronavirus pandemic for sure. Even nature enjoys the break we all took while the future looks grim, or uncertain.

Two pandas have got the opportunity to enjoy their privacy and mated for the first time in a decade in this April.

Due to the COVID-19 pandemic, the Ocean Park Zoo in Hong Kong has been closed. The 14-year-old pandas, female Ying Ying and male Le Le, have finally mated after years of encouragement by their handlers.

This news made the staff at the zoo ecstatic as the giant pandas are bad at breeding, especially in captivity.

There’s was nothing about the coincidental timing, but the couple had clearly learned to copulate after years upon years of “trial”. The zoo shared photos of them. The officials hope that the encounter will lead to a pregnancy.

But they can’t learn about the good news until about 14 to 17 days before birth. In order to confirm the pregnancy, they need an ultrasound.

Wholesome quarantine footage: Giant panda Ying Ying and Le Le in Hong Kong did what many people do under #coronavirus lockdown, do what comes naturally…for the very 1st time in a decade for this panda couple pic.twitter.com/kNH5bDrbgQ

Ocean Park’s executive director in zoological operations and conservation, Michael Boos said that the chances of pregnancy through natural mating are much higher than artificial insemination:

“Since Ying Ying and Le Le’s arrival in Hong Kong in 2007 and attempts at natural mating since 2010, they, unfortunately, have yet to succeed until this year upon years of trial and learning.

The successful natural mating process today is extremely exciting for all of us, as the chance of pregnancy via natural mating is higher than by artificial insemination. We hope to bear wonderful pregnancy news to Hong Kongers this year and make further contributions to the conservation of this vulnerable species.”

The pandas have given signs that they were ready to mate since late March.  Ying Ying started playing in the water more often, and Le Le started leaving scent-markings around his habitat and looking for her scent.

Such behavior is common during the mating season.

“If successful, signs of pregnancy, including hormonal level fluctuations and behavioral changes, may be observed as early as late June, though there is always a chance that Ying Ying could experience a pseudo-pregnancy.

We hope to bear wonderful pregnancy news to Hong Kongers this year and make further contributions to the conservation of this vulnerable species.”

Pandas have recently been reclassified as “vulnerable” on the IUCN Red List of Threatened Species while they were previously considered “endangered.”

There are only around 1,800 giant pandas in their natural habitat according to the Ocean Park.