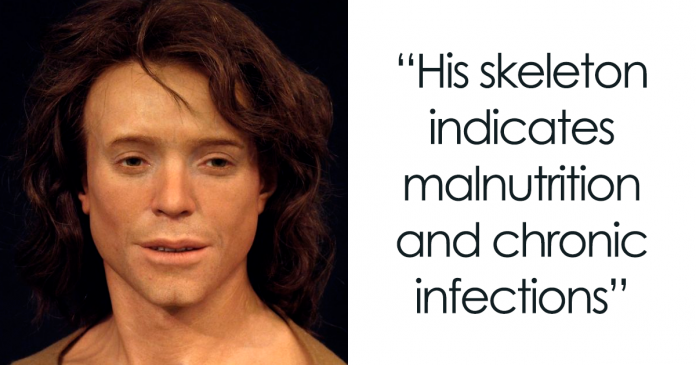 A Swedish sculptor and archaeologist, Oscar Nilsson specializes in reconstructing faces. He used his talent to create the faces of a handful of people who lived hundreds, or even thousands, of years ago in one of his recent projects. He used their excavated bones as a reference to give us a thought of how those people might have looked like.

O.D. Nilssons is a company opened by Oscar in the mid-90s that collaborates with various museums to help restore the faces of people whose remains were discovered during archaeological excavations. He added that the human face and all of its details never ceases to fascinate him. Oscar wrote, “And all the faces I reconstruct are unique. They are all individuals.”

You can see his amazing sculptures in the gallery below!

Wari woman, who is nicknamed Huarmey Queen’s remains were discovered by Polish archeologists in the north-west of Peru back in 2012 along with 57 other noblewomen. They were all buried with lots of jewelry, gold, and expensive textiles. According to archeologists’ examinations her she had spent most of her time sitting, most likely weaving. This was also proved by the golden weaving tools found around her.

This Stone Age girl was dead when she was around 20-years-old. The cause of death was most likely childbirth as she was buried with a baby on her chest. It can be proven that the people living in Brighton (United Kingdom) at the time weren’t white and their skin color was like of North Africans even if the DNA was not preserved too well.

Estrid Sigfastdotter was a rich woman who lived in the XI century AD near Stockholm. She was around 80-years-old at the time of her death. So it’s pretty impressive when life expectancy at the time was just 35.

Adelaziy Elbakhusom (Adelasius Ebalchus) lived in Switzerland in the VIII century AD. The man had beautiful teeth, which was rather unusual for the time. He was most likely malnourished and suffered from chronic infections when examining his skeleton.

The remains of this Neanderthal woman were found in Gibraltar back in 1848. She most likely lived about 45 before 50,000 years ago.

Oscar wrote, “Finally a few words on something I thought of and struggled with, as I saw this Neanderthal face take shape. How “human” should this face appear? They were not Homo Sapiens after all. I came to the conclusion that she must have a human glimpse in her eyes. As recent research show, Europeans share around 2-4 % DNA with Neanderthals. So they must have been so much alike us, otherwise, the offspring would not have been fertile. It is interesting to see how the image of the Neanderthals has changed over the years: from being a drooling savage to a highly-skilled competitor to us. Worth to note is also that this new image coincides with the insight that we Europeans share 2-4% DNA with the Neanderthals.”

Viking who was Swedish lived around the beginning of the XI century. He died at the age of 45.

This man lived 25 to 40 years old about 5,500 years ago. He was of a rather slender build when judging by the analysis of his skeleton.

Avgi is a 18-year-old girl who lived in modern-day Greece at 7000 years before Christ.

09 A Man Who Lived In Britain In The Saxon Era

This man was most likely quite burly-built when judging by the bone structure. He has lost a lot of teeth due to abscesses, as well as a part of his upper jaw. According to the traces of injuries, he might have been a soldier. He died being around 45 years old.

10 A Man Who Lived In The Iron Age In Britain

This man from Britain lived before 2,400 years ago. He was well-built and he died aged between 24 and 31 years old. His hair is styled in a hairstyle the Germanic tribes called “Suebian knot”.

According to the remains of this woman, she worked hard physical labor during her lifetime and died being between 25 and 35 years old.

This malnourished and anemic man lived before 3,700 years ago and died being between 25 and 35 years old.

Oscar writes, “Finally, the reconstruction of the medieval middle-aged man from the middle of Sweden is finished. Although now it turns out he may not be that medieval after all. C14-results indicates that he is from somewhere during the period of 1470-1630. However, analysis of his skeleton shows that he suffered from so-called os acromiale, a defect in the bones of the shoulder with a clear connection to heavy use of longbow-shooting! So, maybe it is possible to narrow the time span to 1470-1540, as longbows gradually fell out of fashion to use during the mid 16th century.”