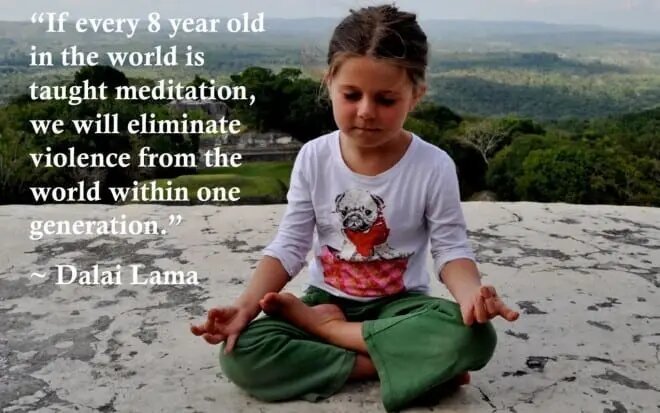 Quiet Time – a stress reduction meditation strategy used in several San Francisco middle and high schools and this looks like something out of the om-chanting 1960s at first glance. Those rowdy adolescents, who normally can’t sit still for 10 seconds shut their eyes and try to clear their minds twice daily in the classroom.

Parents and policymakers should pay serious attention to practice meditation in schools. According to an impressive array of studies, integrating meditation into a school’s daily routine can markedly improve the lives of students. Quiet Time could spread this citywide if San Francisco schools Superintendent Richard Carranza has his way.

Visitacion Valley Middle School became the first public school nationwide to adopt the program in 2007 and it shows why the superintendent is so enthusiastic. Their neighborhood is surrounded by gunfire like birdsong. In the past month it has been recorded nine shootings and most students know someone who’s been shot or did the shooting. This area is full of murders and the school employs a full-time grief counselor.

These students were largely out of control, frequently fighting in the corridors, scrawling graffiti on the walls and cursing their teachers in the past years. There were lot of absenteeism and suspensions. Worn-down teachers routinely called in sick.

Academics suffered a lot. There was no use even though the school tried everything, from counseling and peer support to after-school tutoring and sports.

But, now these students are doing light-years better. The number of suspensions fell by 45 percent in the first year of Quiet Time. Surprisingly, the suspension rate was among the lowest in the city within four years. Daily attendance rates were above the citywide average as it climbed to 98 percent. Even the grade point averages improved markedly.

It was a rarity to attend a high school for any students before Quiet Time. But now, about 20 percent of graduates are admitted to Lowell High School. These middle school youngsters recorded the highest happiness levels in San Francisco in the annual California Healthy Kids Survey.

Three other schools have also adopted Quiet Time and the reports are similarly positive those too. For example, the students in the program report significantly less stress and depression, and greater self-esteem, than nonparticipants at Burton High School. The students who have been doing worst academically have markedly improved with stress levels down. When comparing with those who weren’t in the program, the grades rose dramatically.

Many students in Quiet Time schools have become proficient in English and the gap in math is even bigger than the students in similar schools where the program doesn’t exist on the California Achievement Test. According to teachers, they’re less emotionally exhausted and more resilient.

“The research is showing big effects on students’ performance.”

“Our new accountability standards, which we’re developing in tandem with the other big California districts, emphasize the importance of social-emotional factors in improving kids’ lives, not just academics.

That’s where Quiet Time can have a major impact, and I’d like to see it expand well beyond a handful of schools.”

Quiet Time is a game-changer for many students who otherwise might have become dropouts. Because of that reason, you can make meditation at every school staple, not just in San Francisco.