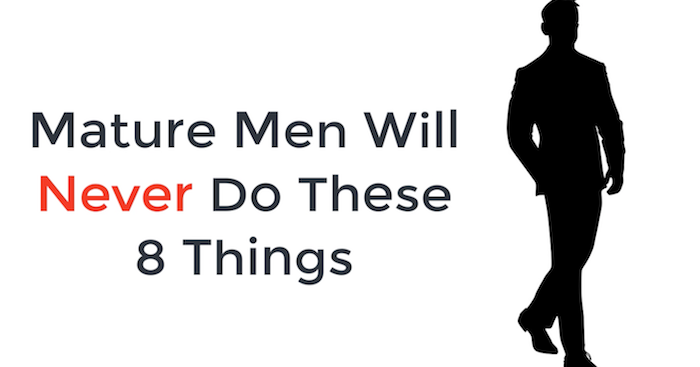 We actually don’t know when and how a person gets matured and grown-up. When becoming mature, time and circumstances play a major role, but everyone doesn’t grow up equally.

You cannot buy maturity or it’s not a hereditary feature. It happens through years of understanding and grooming of the world around you. There’s no any actual time frame for being maturity.

Being honest and stand out in a social situation with a strong mindset is a big effect on his personal relationships.

Here are 8 factors of a truly mature man that women find attractive.

A mature person will not run away from a dangerous situation. Instead of reactive to it at all, he becomes proactive and finds out a positive outcome. He will always think that difficulties are to become stronger in life.

He faces very well to the criticisms from other people. He knows about his abilities and never deter from others’ criticism. He also doesn’t criticize his partner’s actions, flows and her appearance, dreams and workplace. He values her everything and never hurt anyone in any situation.

He knows how to act in certain places like a responsible adult. But, when he is with her, he let out his true feelings. The fundamental groundwork of a successful relationship is the proper communication and he knows it. When someone expresses their emotions he never underestimates it, but he respects them.

He will never let you feel alone when you are with him. He’ll always love you and appreciate you and give you the best place in his life. He also introduces you to his family and friends hoping that you get along with them.

He will respect you and your emotions in every time and will not let you feel inferior when you are with him. He will also never abuse you physically or verbally.

He is always with a plan for his future. He has goals and targets to achieve and always want to have the best in his life. As a matured guy he is a driven and a positive character. He needs to be a strong person and he shares everything with you. He also encourages you to achieve your dreams in life.

He doesn’t boast about himself. He knows that he still has a lot to learn and a long way to go. He doesn’t care about taking advice from others and work hard on his weaknesses to fix them. He just wants to be a successful man in his life.