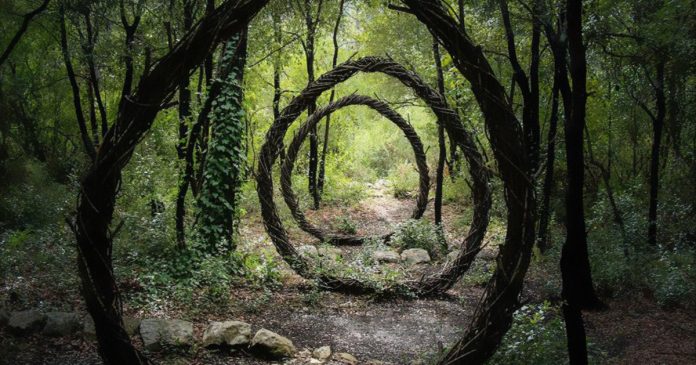 People try to bend nature to his will to make something great. But Spencer Byles is different and he wanted actually to work together with nature. So, he decided to spend a year making sculptures in unmanaged forests in France. He built over twenty sculptures and installations in the regions of La Colle Sur Loup (where he lived with his family and had a workshop), Villeneuve Loubet and Mougins using naturally sourced materials and found man-made objects.

The creations are temporary and little bit hard to spot. They make the sculptures blend with nature better. Byles considers the high point of his project to be hen nature starts to reclaim his sculptures. He wanted to remove the wires that were used to keep several of his statues in place as he cares about nature so much.

Spencer‘s sculptures are like remnants of infrastructure left by a fantastic forest-dwelling people. The creations look downright magical, like something ripped straight out of A Midsummer Night‘s Dream, Elven gates, fairy prisons, dryad pods. The Blair Witch Project if you‘re less inclined to benign fantasies.