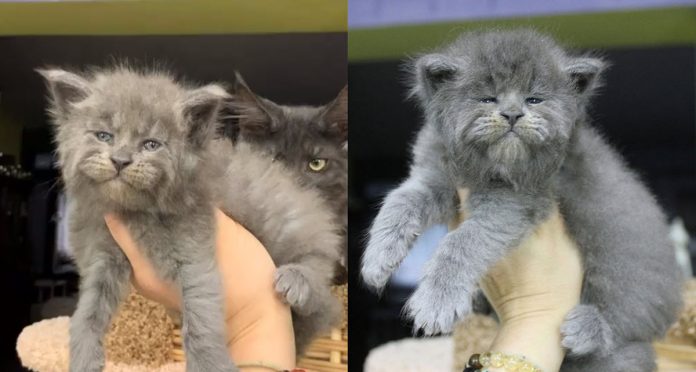 The biggest domestic cat breed in the world is the Maine coon cat In terms of size. They are also growing in popularity. Everyone would love big and fluffy kitties. Maine Coons can grow up to 40 inches in length, and they have over 75 distinctive color combinations. These cats have long, multilayered fur. Their large paws help them to handle the coldest winter climates and they do not fair so well in warmer climates. According to one interesting theory about their origins, they might have come to North America thanks to the Vikings as these cats are the descendants of Norwegian Forest cats.

They have unique features to separate them from other breeds. They have very unique faces that some tend to think that they look like human faces. A cattery called Catsvill County has shared some photos of a litter of five adorable gray kittens recently and they all looked just like grumpy old men.

It’s not difficult to say that these cats have faces that resemble human expressions.

All the kittens are like the same. And these fluffy little furballs are really cute.

Here are some of the photos of adorably grumpy-looking kitties.

And here’s what people had to say about that.

Here’s a video of one of the little fluffballs.