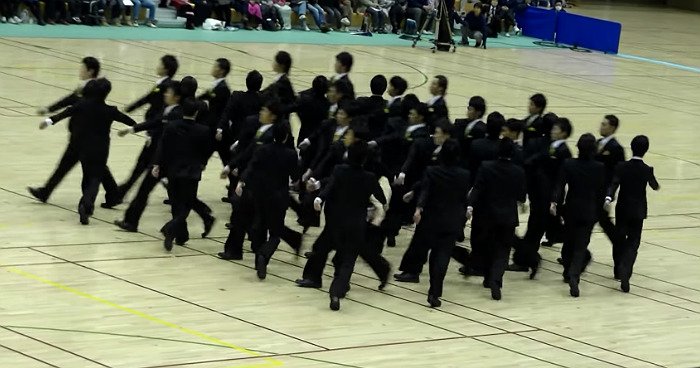 In every sport, it needs the all your dedication, persistence and teamwork.

If we look at synchronized walking with a Western perspective it may look a little bit odd. But it needs a whole lot of teamwork and precision to look like an illusion and it really impressive.

Part sport, part performance which is called as Shuudan Koudou was invented nearly 50 years ago at Nippon Sports Science Japanese University in Tokyo. They took the walking to its core.

“Shuudan Koudou,” translates to “collective action” or “group movement”, but “synchronized walking” is the best name to describe it.

It’s a train for months, walking hundreds, even thousand kilometers for the students who participate in the annual Shuudan Koudou performance.  The students even need to exercise to get them in shape for the dazzling display. This was initially opened only for men and later opened for women in 2011.

The former team captain Keiko Suzuki said, “People say Japanese youngsters these days lack the ability to work collectively in a group, but we just proved that we don’t, we all mastered this highly disciplined training and made it our habit to stick to strict rules. I believe this experience will be an asset as we enter into the job market.”

It looks like these performers are walking through themselves when seeing at this for a couple of times. It’s a really unbelievable and stunning performance.

Thanks to Takeshi Yoshikawa for this impressive video.

Watch the incredible video below:

Mother Heartbroken After Learning Her Toddler Has Dementia