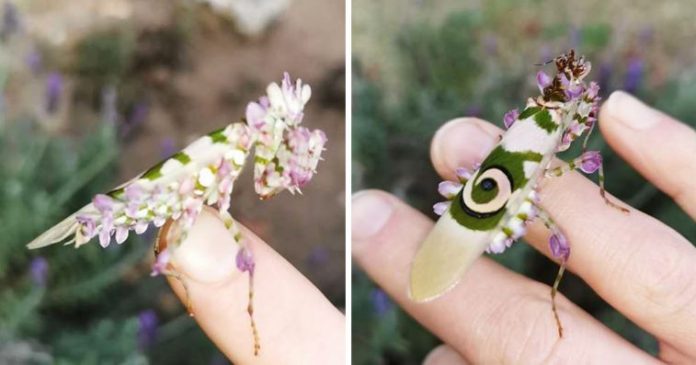 Margaret Neville who lives on a farm in South Africa loves taking a stroll through her surroundings. She was enjoying the view of her garden and one morning she saw a pretty bug on a branch in her lavender bush. It was an insect unlike any she’d seen before. Neville told The Dodo, “I was amazed at first sight.”

And you’ll see why.

This insect is called a flower mantis. It is a species of mantis that camouflages themselves in flowers.

According to experts, she looked like a pregnant female as you could see her broadening frilled edged belly beginning to extend sideways. She hunts bees that come to the flowers of herbs such as purple and rose pelargonium. She used to sit at the flowers and hunts using her camouflage. Even though it’s named as Miss Frilly Pants, she is more formally known as Miss Pseudocreobotra Wahlberg (Spiny flower mantis).