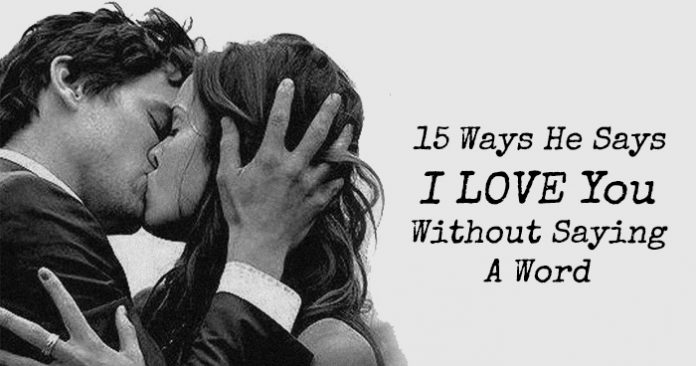 In order to continue any relationship, there should be communication. But there are some things that are easier said than done.

Words don’t come easily during the initial stages of any relationship. It is generally said that women are the ones who hold back their thoughts. Men are also equally shy and nervous while making their feelings known.

It doesn’t mean that they don’t value you in their life. They’d do everything to make you believe that, without saying it as many words.

Here are 15 ways in which men show their love without even saying a word:

2. He’d not let any chance of holding you close slide by. It doesn’t matter whether the two of you are alone at home or at the movies, he just can’t keep his hands off of you. This PDA would never be in bad taste. He loves having you in his arms, hugging you or holding your hand.

3. He’d always pay attention to you. Every time you need him, he will be with you. You can always count on him to give your words the importance that is due to them. He always listens to you, and be there with you.

4. There would be little gestures sprinkled here and there such as giving your hand that extra squeeze before letting go.

5. It’s certain that he’d be there the next day no matter what happens, through however many tantrums and fights both of you have. He won’t give up easily, and stays with you even through thick and thin.

6. Men don’t like when others touch their hair. But when it comes to you, he loves playing with your hair every chance he gets.

7. He actually puts thought and time to get a gift for you. He also wants you to like it and appreciate it as well.

8. He keeps touching you every chance he gets, random hugs, holding you by your waist, touching fingers, anything and everything.

9. He laughs freely when he’s with you. He doesn’t have his guards up when you are with him. He is simple and happy with you.

10. He likes to be like you. He will do anything to match your actions, as they mean a lot for the relationship.

11. It is necessary for him that he’s always in touch with this path into your being. He will always make eye contact and never shy away from your gaze.

12. He appreciates your random texts and matches you for them. He might give you a call anytime he misses you or thinks of you, just to let you know. He always has time to respond to your texts and calls too.

13. He is always there whenever you need to lean on him. As he wants to be your pillar of strength he would always be upright around you and his body language will show it.

14. He has a radiant glow in his face when he has kissed you. His smile is like the cutest child.

15. His friends have a deep appreciation and great fondness for you as he can’t help himself from talking about you to anyone and everyone who’s close to him. And their love for you reflects on how he has portrayed you in front of them.

10 Funny But Honest Differences Between Men and Women.