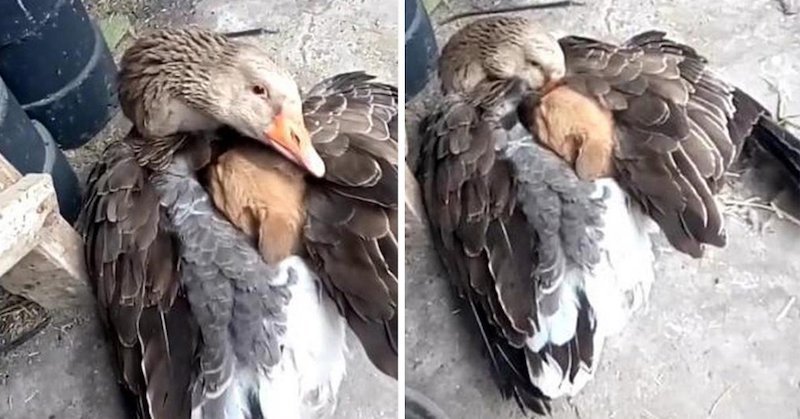 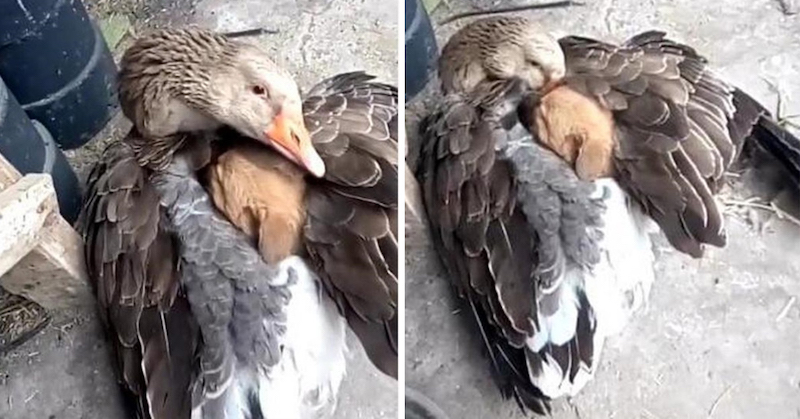 Here are some heartwarming photos of a goose protecting an abandoned puppy from the cold should be shared worldwide. “Real love and friendship know no boundaries and for this compassionate goose, it knew exactly what it had to do when it saw a shivering puppy on the street.”

Someone has come upon the scene on the street and posted on Facebook. At first the user “thought that the goose was going to attack the puppy after seeing it staying close to the puppy.”

The puppy was abandoned right after the birth and was shivering terribly in the cold. The post shows that the goose has wrapped its wings around the puppy and later stroked its head with its beak without any hesitation.

There are lots that we can learn from animals. When perceiving suffering and involves an authentic desire to help, “Compassion” has been defined as an emotional response.

When animals react with compassion in ways, it teaches us the human can always do more than them when we see others suffer.

Survival of the Kindest

It is said that there is an evolutionary basis on compassion. According to Dacher Keltner, a professor at the University of California, Berkeley, says that Charles Darwin himself never used the phrase, “survival of the fittest,” (he argues that the expression was used by people advocating for the superiority of different classes and races).

Keltner tells us that Darwin “argued for ‘the greater strength of the social or maternal instincts than that of any other instinct or motive… Communities of more sympathetic individuals were more successful in raising healthier offspring to the age of viability and reproduction.”

“We are happy to report that shortly after these photos were uploaded to Facebook, the puppy and the goose were adopted together and now have formed a lasting friendship in a home environment. Now they are inseparable.” – The Barking Army posted on their Facebook page

Here are a few videos of some other duck and dog pairs.  They also feel strong emotions and bonds of friendships just like we humans do.

We can see the caring this goose showing for the shivering pup. One of the most powerful forces in the world for kindness and good is that maternal instinct.