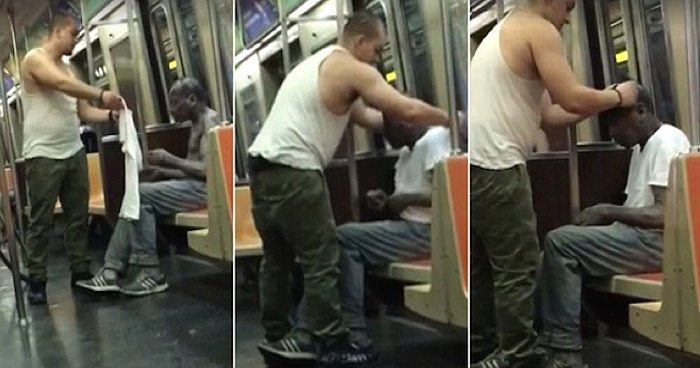 The power of compassion we possess as humans is well demonstrated in a cell phone video that has been seen by millions all around the world. A man took his shirt off and gave it to a homeless, shivering man. It also demonstrates how powerful the social media to spread such a good news in a short period of time.

A man with an amazing heart, who is 23 years old, Joey Resto saw a homeless man on a night when he was on the Downtown A Train. As he scents a bad odor, other passengers were standing a few seats away from him. But Resto wasn’t like the other people; he went straight to him and offers him the shirt off his back.

Resto says: “It was freezing that night. He looked cold and hungry.”

He gave his shirt and also helped him to dress it. He even gave his hat to the old homeless man.

Resto said that “He looked so weak and frail. I had to help him, or he would not put it on.”

In the meantime, someone took a video of what Resto did and posted it on Facebook. It has become viral and spread around the world.

“I thought, wonderful thing he did because we have to help others in need,” says the mother of Resto’s girlfriend, Annie Martinez.

“The fact that he gave clothes off his back so they could be warm, I thought was pretty great,” said Resto’s girlfriend, Yanisleidy Martinez.

Resto invited the homeless man to his apartment so that he could give some more clothes and food to him. But as soon as he got the shirt and hat, he went away from that place to sleep immediately.

He inspired the entire world to help those in need.

Thanks to WORD of LIFE for this amazing video!

Here is the amazing video below:

Share this kind-hearted man’s video all around the world.