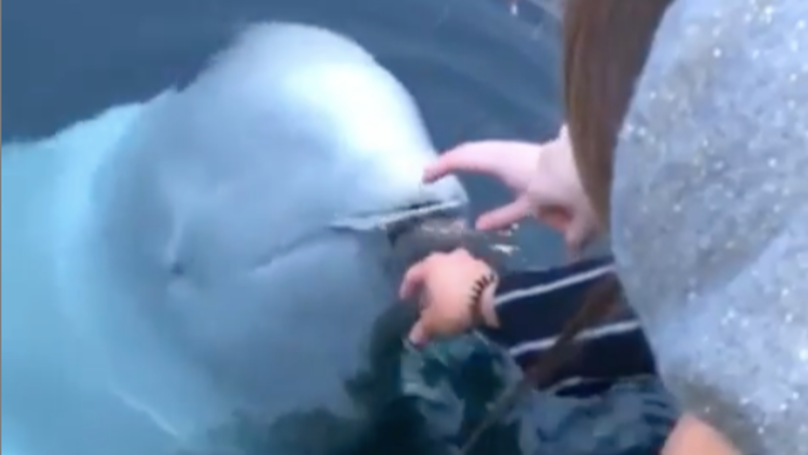 A Beluga was found off the coast of Norway and defected from Russian Military waters.

Locals were rather intrigued when this was found by Norwegian fishermen, a few miles from Hammerfest, reportedly wearing a harness with a camera or weapon mount with the words ‘Equipment St. Petersburg’ on it.

According to experts, the whale was specifically trained for military or otherwise purposes. They were scared that it would adopt in the wild.

The whale has the kindest of souls regardless of its original purpose or how it got there.

In order to spot the former spy whale, Ina Masika headed to Hammerfest with her friends. And Ina made a crucial mistake when they managed to spot the beluga. Her phone dropped from her pocket into the icy Norwegian waters, sinking down into the dark.

After a while, the former spy whale sunk into the depths and returned her phone in its mouth to her.

As reported by The Dodo:

“We laid down on the dock to look at it and hopefully get the chance to pat it. I had forgotten to close my jacket pocket and my phone fell in the ocean.

We assumed it would be gone forever, until the whale dove back down and came back a few moments later with my phone in its mouth!

Everyone was so surprised. We almost didn’t believe what we saw. I was super happy and thankful that I got my phone back.”

But Ina’s phone was irreparable. Ina’s friends caught this situation all on camera, as the evidence for when the Apple store asked what had happened.

According to experts, you shouldn’t avoid feeding the whale as it needs to learn how to effectively forage on its own, with the hope that it would eventually join a pod of belugas. It will be placed in a sanctuary if this is unsuccessful.