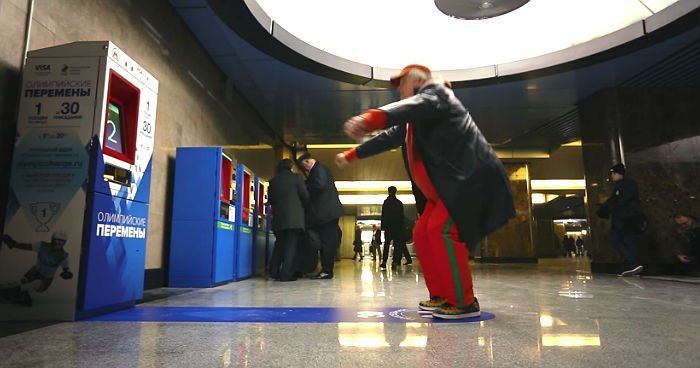 A workout pays off for the subway tickets in Russia: health and economy go hand-in-hand.

It hosted Winter Olympics in Russia around this time and they have initiated a program, at the Vystavochaya Station.

The games are more than the mere international competition as stated by an Olympic official. Within the daily life of the passengers, this would help kick-off the ambition to mingle sports.

You should see the video to know this program.

You should be good at squats before you do that. If you could pull off 30 reps within two minutes your subway rides from the mentioned station would have been free. Even though it’s a lot of work, it benefits in a lot of ways such as you save the 30 rubles, strengthen your core and become fit, the cherry on the top is the appreciation and the cheers you get from the fellow passengers and the bystanders. They exactly keep track of the squats you do by equipping the ticket machine with the sensor. If you do it correctly it is counted as one and if you do it wrong you are a step closer to paying the fare in monetary terms.

You may have thought that only fewer people have won the ticket. But, just see the video; you will realize just how enthusiastic people were when offered a free ticket for 30 squats though it seems tiresome to perform. A handful of free tickets were issued as people of Moscow lead a healthy life, full of energizing workouts already.

It makes a lot of sense what the Russian Olympic Committee did. There were one step beyond the international competition and innovate the idea which is more practically with this system.

This video will make you realize how effective this can be in the long run.

Thanks to Olympic Change and Squatting Slavs In Tracksuits for providing these videos!