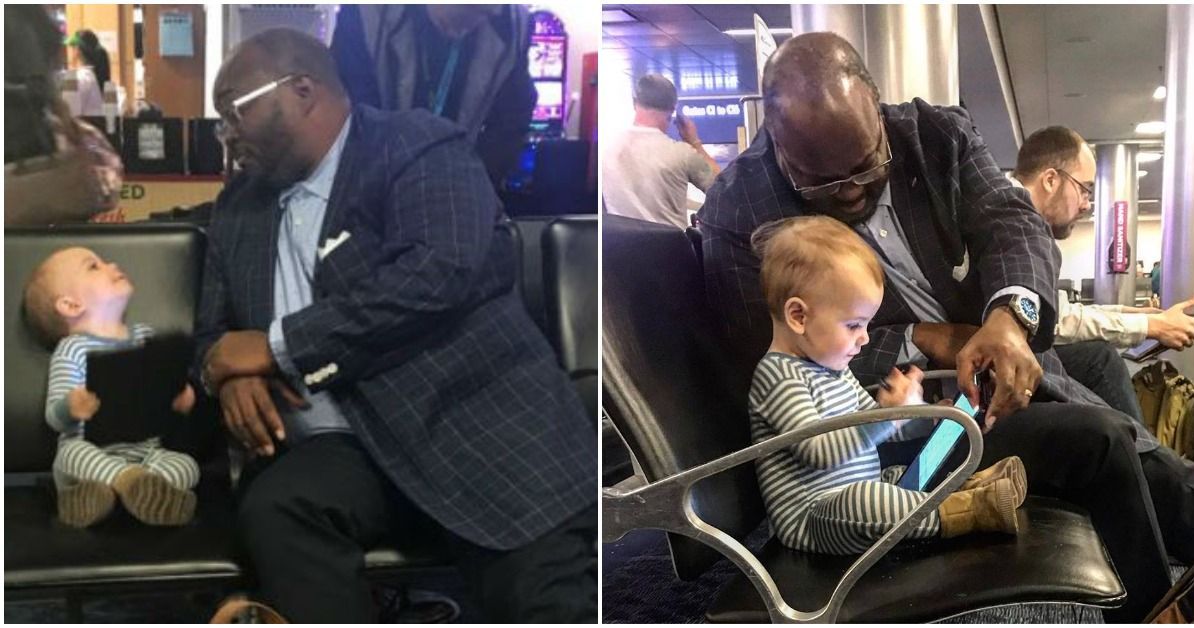 Carter is 16-month-old sweet little girl. She was waiting to catch a plane with her former US Marine father Kevin Armentrout. They were in Las Vegas sitting around the gate until boarding their airplane on their way to San Diego.

Joseph is a field sales manager for Samsung from Oklahoma and he was sitting in the same area, but a neighboring gate. He was waiting for his flight back home. Carter saw him sitting next to her and befriended him at the airport. 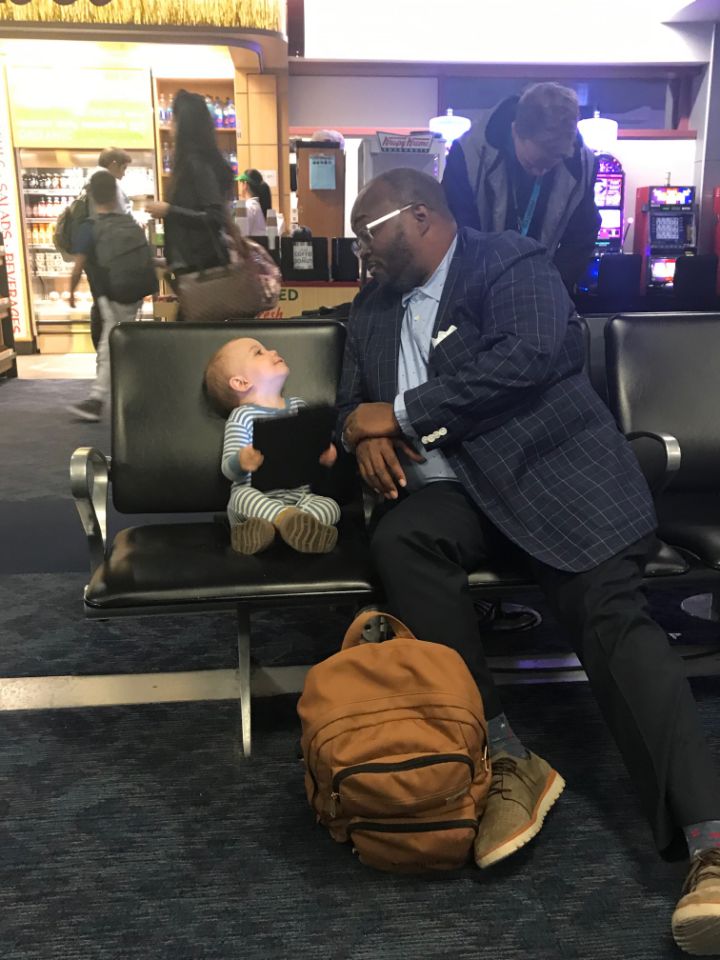 Joseph invited this little girl to sit next to him and a beautiful heartwarming friendship was begun. This friendship is a great example to prove that kindness has no boundaries. Joseph taught Carter how to draw pictures on his tablet for 45 minutes. They also watched cartoons together and Carter shared her cheese puffs with him.

Armentrout was really happy and he shared a photo of Carter and Joseph having a great time together on social media with a lovely statement. He hopes that this photo with his little girl’s interaction serves an example for all. 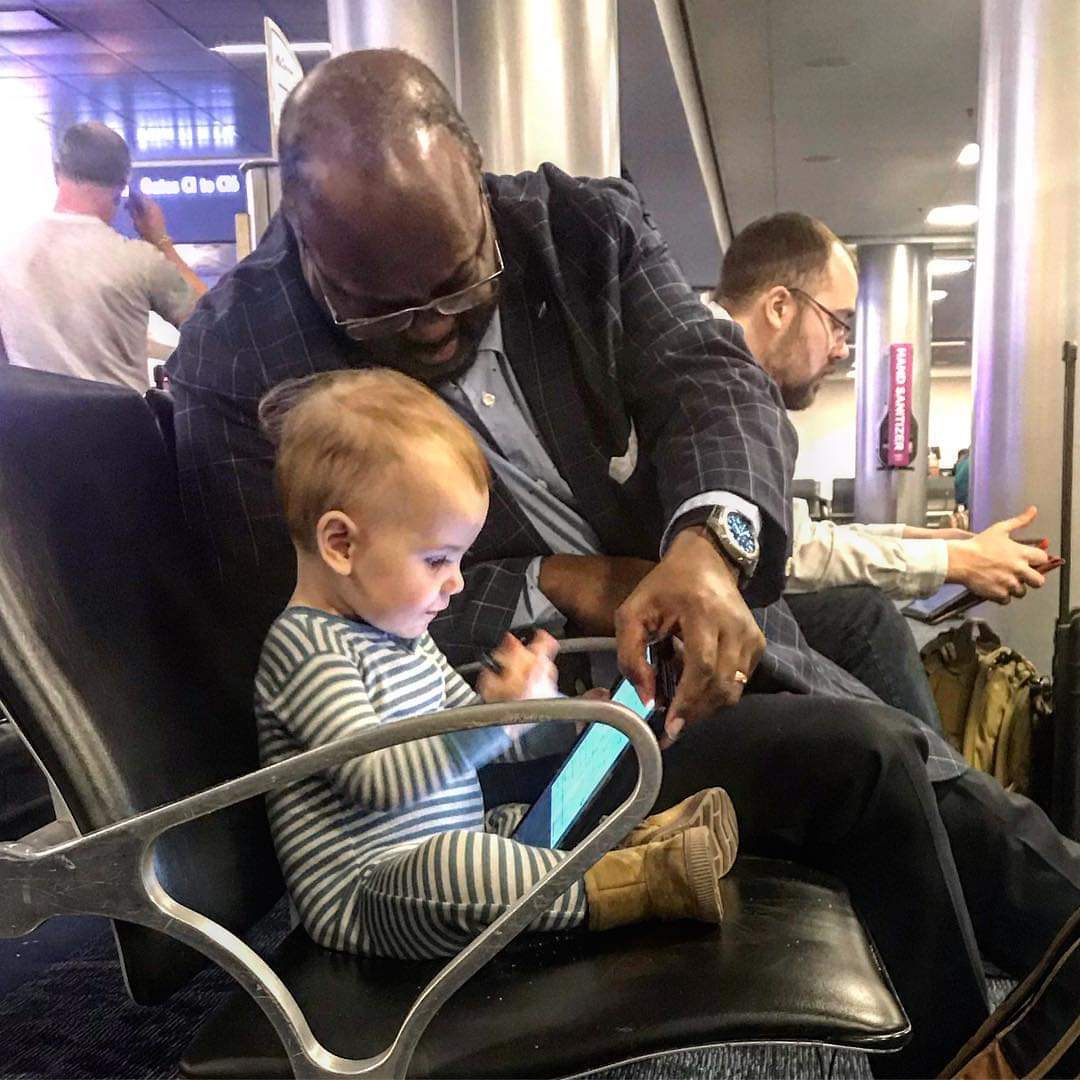 Here’s the description he wrote to the photo post:

“Last night, while waiting to board our plane, @_carterjean_ was being her usual inquisitive self wanting to meet and say “hi” to everyone she could, until she walked up on this man. He reached out and asked if she wanted to sit with him. He pulled out his tablet and showed her how to draw with it, they watched cartoons together, and she offered him snacks. This wasn’t a short little exchange, this was 45 minutes. Watching them in that moment, I couldn’t help but think different genders, different races, different generations, and the best of friends. This is the world I want for her.”

In a country that us continuously fed that it’s so deeply divided by beliefs, I want her life to be filled with moments like this… not liberal or conservation republican or democrat, socialist or capitalist, just HUMAN.

Joseph from @samsungus in Oklahoma, if this should happen to find you. Thank you for showing my daughter what kindness and compassion looks like. Continue to shine your light in the world. #HatelsLearned #LiveWithPurpose #BeRelentless

Just check out the post and see it has racked up over 200,000 shares and almost 550,000 likes. It proves that the world like to have this kind of equality and borderless mentality among people for humanity.

Armentrout said that he talked with Joseph and he is doing well and they all are happy.