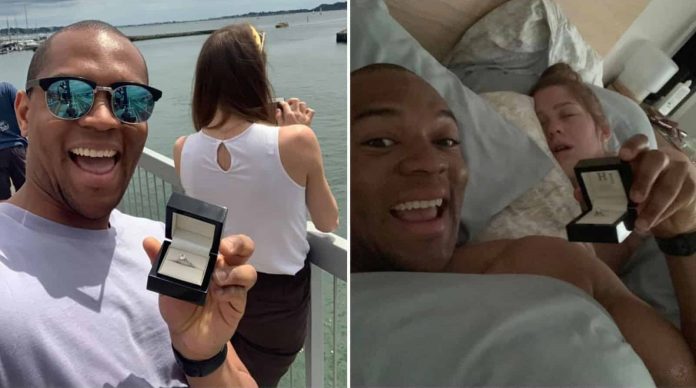 One of the most exciting events in someone’s life is getting engaged. It is also something to be remembered for years to come. Edi Okoro picked out an engagement ring for his girlfriend Cally Read and waited until the perfect moment to ask for her hand in marriage.

Edi decided to parade the ring around her a little before asking the question. There’s no harm in dragging it a little longer as they would be together forever.

In order to see how long it would take for his gf to notice He even documented his engagement ring challenge in photos. Here are the hilarious photos of this boyfriend trying to see how much he could get away with before his beloved girlfriend caught on.

Just chilling on the couch with the engagement ring while edi’s girlfriend is in the kitchen behind him. No big deal.

He even left it in her jewelry plate for two days without her noticing.

Wearing the ring before she got a chance to.

She photobombed this without even trying to, and luckily she wasn’t turned around to see her boyfriend posing with her soon-to-be ring!

Maybe she’s dreaming of what her ring will look like while her boyfriend holds it in front of her.

These just keep getting better, don’t they? How close do you think he can get before she finally notices??

Looks like he brings the ring with him wherever he goes. These pictures just keep getting better and better!

It’s funny how in all of these pictures, she seems to be conveniently turned the opposite direction.

This one gives me a little anxiety, i have to say!

Wow, this guy is having way too much fun with the engagement ring challenge!

Luckily his girlfriend can’t see well without her glasses, so this was an easy way to get the ring in front of her without her noticing.

Wow, this one’s almost too close for comfort!

We love how happy he looks in every photo where he’s posing with the engagement ring. He just can’t wait to show his girlfriend all these pictures!

The ones with both of them in the picture are just the best.

Even on vacation, this guy can’t help himself.

Modern technology really is the best when you want to pose with an engagement ring while your girlfriend plays on her phone.

We will leave you with this photo. These are just the best.

Have you tried the engagement ring challenge?

You can have some ideas if you want to partake in the engagement ring challenge. Share with us in the comments which photo was your favorite.