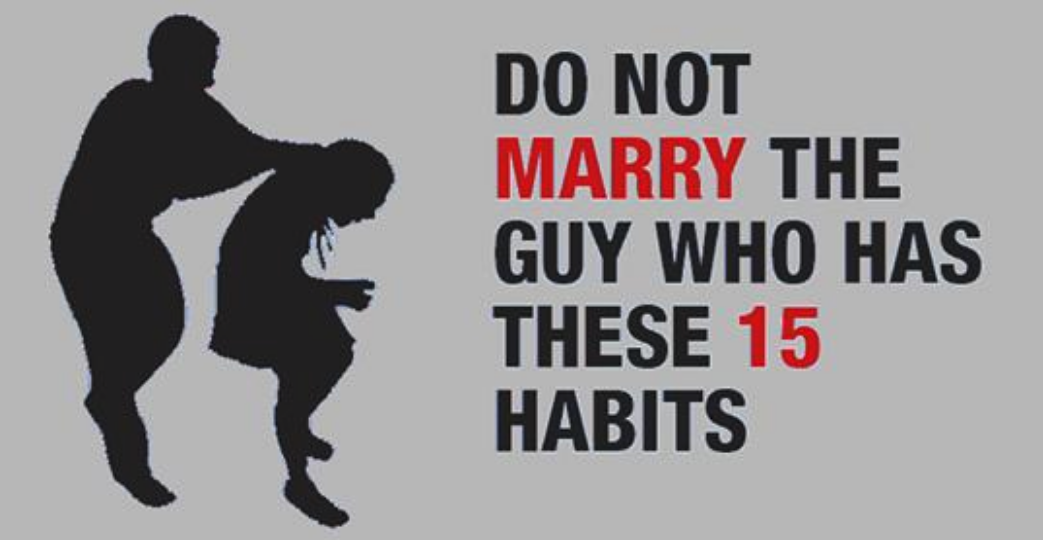 Choosing your life partner is not easier as you think. It’s a life time decision. There is a famous saying “Love is blind”. I think that loving blinding is not the best thing. It’s true that you don’t know a person before you start to interact with them closer, but you must know each other better before you go to a relationship. Most of us ignore the bad behaviors when we are in love because of our immense love towards them.  This can lead the relationship to an end.

Here are some things that you never though would be considerable. Sometimes you might have ignored them because of your love. If your guy has these 15 habits, you should never choose them as your life partner.

He Doesn’t Trust You

Trust is very important in a relationship.  If you have trust then there won’t be any other issue. You must always try=us each other. Both of you need space in your life. Privacy is very important. Being too clingy is not an option. Does your guy always check your phone and does he makes rules when it comes to male friends? You might think that he is doing this because of his love and he doesn’t wants you to be with other men. Well, it’s not right because it’s not jealously. It’s because he doesn’t have trust on you. He thinks that you may be not loyal to him. He might also think that you can go with him anytime. This can get worse and you’ll have more restrictions hanging from your neck before you know it. You should think twice before you marry this guy. No matter how romantic the proposal may be.

I think that the difference between animals and humans are that the animals can’t talk as us. But animals are more loyal than animal I guess. Such as dogs. How can anyone not love animals? And does your man hate animals? Then there is an issue. Do you think that he is good enough to be your life partner? Will he be kind enough to you or anyone else? The answer is no. they are not kind hearted people. According to scientists they lack kindness and empathy. This is not a good quality. These people are also bad father figures. This automatically shows that you can’t lead a successful family with these people.

When you are in love. You must have comprises between each other. There must be some rules and regulations, but to a limit. These restrictions can be for cooking, shopping, washing dishes or having time for each for the weekend. These can be acceptable. These restrictions may even help to to build a strong bond between the couple. If your man finds faults following these minor restrictions. Do you think he will keep you happy? Even if he promises you to follow them and forgets about the promise later. It’s a big issue.

He Will Break Promises

Your man should respect to whatever you say. You must have agreements and promises together. You much understand each other likes and dislikes. If he breaks your promises all the times, it means he doesn’t care for the relationship. It means he is having a good time pass with you. He is not serious about your emotions or feelings. This is clear that he is not a suitable person to marry.

You’re Second to Everything Else in His Life

Actions speak more than words. Confidence is better to have, but not too much of it. Everyone must understand that no one is perfect. If your man always thinks that he is right, then there is an issue. It means that he is underestimation you. He thinks that you never take right decisions.  This can lead to a very bad relationship. Before everything gets worse you must dump this man as soon as possible.

He Finds Excuses for Everything

Sometimes, things will not go as planned and that’s all right. However, if your guy never makes it to important occasions, you should consider the possibility that he’s not into you. Find a man who loves you and appreciates you for who you are instead of wasting your time with jerks who make excuses all the time.

He Brings Out Old Fights

You must have arguments in a relationship. It is too boring if your relationship is too plain. Laugh together, cry together, do everything together. If this happens too often, then it is an issue. If your man always drags old problems and wants to shout about it all the time. Then this might lead to a headache. You won’t be happier anymore. He will bring too much negativity to the relationship. Eventually your relationship will break. It might be best to disappear than committing these relationships.

He Doesn’t Want to Talk to You

No matter what happens in your life. He doesn’t wants to share anything with you or to listen to anything you have to say. You can always sort out things after an argument. It’s always by having a good conversations with a good coffee, but if he rejects it. The best thing is to reject him itself.

If your man lies to you often or has cheated on you in the past, he will never stop no matter how much he tries convincing you in the opposite. If a person does something once, he will never mind it to do it again and again. You can never be too sure of his intentions and some questions will drive you nuts, paving the way for anxiety and depression.

Your guy should be head over heels into you, but if he’s too clingy and wants to spend all his time with you, it can be a problem. You must have your own life. You always have your plans to chill with your friends. If he sees you as the center of his universe, he may be a bit too obsessive. You need to find a man who has his own ambitions and is independent enough to spend time all by himself. Very one must have their own goals. Of course, he should want to spend his free time with you as well.

He Hates His Family

We can’t choose family, so we’re stuck with whatever destiny had in store for us. If your man hates his family, it’s possible that you won’t get along with him somewhere along the way. Family is the first set of people you associate with and they are the first people you love. Its next you go to the society. After all, our parents raised us into the people we are today and should be given credit for it. If he doesn’t appreciate his family, he may be a self-righteous jerk who may end up hurting you. If he does that to his parents then you are next, keep it in mind.

Acting childish may be cute sometimes, but if your guy is immature and blames others for everything that goes wrong, it can be a problem. Being childish near your girl is okay as usual. Because he sees you as your mother. He feels his mother’s warmth near you. Sometime he may be impatient, stubborn or immature during an argument means that he’ll never grow up and it could ultimately lead to the end of your relationship.

It goes without saying that you shouldn’t plan your future with a man who’s abusive. This is the absolute worst behavior that exists. If he uses bad words to shout at you. If he always finds faults and treats to you as if you are an animal. If your guy raises a hand on you, you need to walk away immediately. It doesn’t matter if he’ll apologize and promises he’ll never do it again. Trust us – he will. It’s not just about physical abuse – a man who abuses you emotionally should be avoided as well. Leave while you’re still intact both physically and emotionally. Move on, there something more beautiful out there. Give it a try.