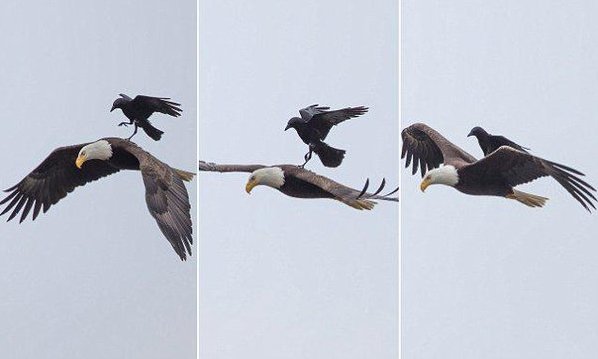 A professional photographer, Phoo Chan who is 50-year-old has captured a most exciting moment. It’s a crow resting on the back of a bald eagle.

He was taking great pics near Kitsap and captured the moment. Then he shared the story with his friends and family.

The bald eagle was looking for food in the Seaback area while a crow land on its back.

“I was photographing a bald eagle flying around hunting for an early meal when suddenly the crow approached the eagle from behind. At first, I thought the crow was going to chase away the eagle.

I have seen crows harassing a hawk by swooping back and forth in order to drive it away from their territory. I was completely awed to see the crow actually land on the back of the flying eagle.

It was as if it was taking a short break and at the same time a free ride. What’s more surprising was the eagle didn’t seem to mind and kept flying as if nothing happened.

I think the crow decided to land on the eagle because the eagle did not respond to its harassment so it landed briefly and then left.

Eventually, the crow flew away and the eagle continued to hunt for its breakfast. They both flew in different directions and it looked like they became friends.”

According to Chan Crows harass other raptors aggressively. He knows a lot about wildlife. Most of the raptors are much bigger in size.

Whenever Crows spot a raptor in their territory they do this. Intruders retreat without a problem. In this case, the crow just needed a ride and it didn’t harass the bald eagle.

His friends and family were impressed with this and wanted to know how he managed to shoot something like this. The photographer explains. “You have to be in the right place at the right time when it happens.”

Bit, some people claim that Chan photoshopped his pics.

Jeff Hamada liked them and he was impressed with Chan’s skills.

“I CAN DIE HAPPY. My fav tattoo has become a reality. A crow riding on a bald eagle!!” Hamada wrote on Twitter.