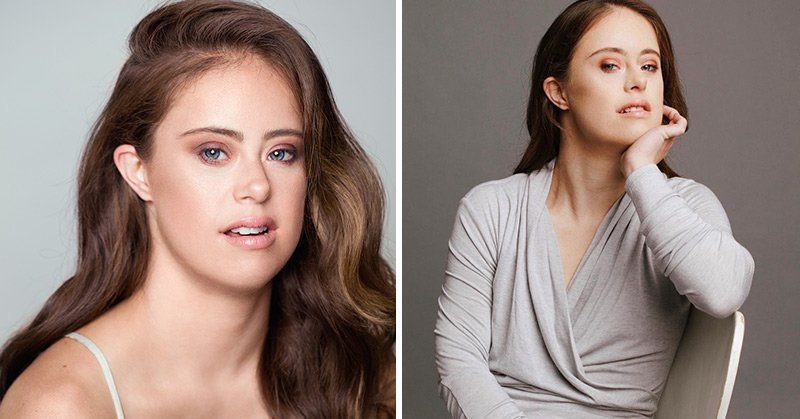 We all come to this world for a good reason. As we all know we all are different and unique and also beautiful in our own way. Chelsea Werner was born in Danville, California. Bu she was born with the most common chromosomal defect that delays physiological and intellectual development, Down syndrome.

When she was four years old, she started to engage in gymnastics in order to strengthen the muscles.  She was actually talented with gymnastics, and she won four Olympic championships in gymnastics later in life.

An international fashion agency named WeSpeak, whose aim is to encourage people to accept themselves and love their bodies, recruited her as a model now.  Chelsea believes that even people with Down syndrome can perform in any area, including the world of fashion. She sent an email to Aplus.com, stating:

According to what she thinks, the accomplishments of people with Down syndrome should inspire the fashion world.  Chelsea won the Special Olympics US championships in gymnastics four times, and also scooped up the title of Defending World Champion twice.

She said, “I’ve been doing gymnastics for as long as I can remember. I feel like it’s always been a part of my life, I think gymnastics has trained me to be disciplined and to work hard. In gymnastics, each new skill takes a very long time – sometimes years! I think it has given me confidence.”

She was rejected whenever she applied to a fashion agency as the modeling world didn’t accept people with Down syndrome. But, she and her parents didn’t gave up and these initial rejections did not deter them.

“I went to some modeling agencies that said there is no market for models with Down syndrome. My parents and I don’t give up. There is a market and I’m showing them!”

She was discovered on social media by the We Speak model scouts in 2017, and after that, her popularity has been growing in the industry.

Briauna Mariah, the CEO and founder of We Speak, explains that she was immediately riveted by Chelsea and never suspected her future success in the fashion world:

“I saw Chelsea’s potential to thrive in this industry and immediately reached out. It’s important that women feel represented in the industry.”

She received global recognition and admiration from all her social media platforms as many people quickly fell in love with Chelsea. She wants to inspire others with her modeling career to accept who they are and work hard to get the opportunity to reach their dreams.

Mariah admitted that working with Chelsea was “absolutely wonderful”. She said:

“Chelsea takes feedback really well and is a quick learner. Right now we’re building her experience in front of the camera, building her portfolio and brand. Soon I believe the industry will be just as captivated by Chelsea’s beauty as I am. I see her going far.”

The story of Chelsea stimulates other people to follow her footsteps and try harder in order to do more and make their dreams come true.

According to Werner modeling is a way to “show the world that we are all beautiful in our own way.” She maintains that her photos convey that “all people have dreams and everyone needs to be given the opportunities to reach them!”

“I hope that people see that I am not afraid to reach for my dreams even in the face of diversity. My mission is hopefully to inspire others to be fearless and also to change some of the outdated misconceptions that exist when it comes to people with disabilities.”