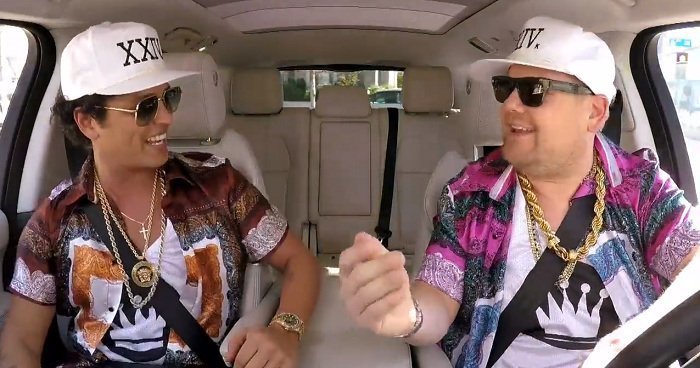 Carpool Karaoke is a recurring segment on The Late Late Show with James Corden.  There he invites famous musical guests to sing along to their songs with him whilst he is driving on a planned route usually in Los Angeles. He does this usually under the pretense of needing to get to work and preferring to use the high-occupancy vehicle lane, or the pretext of needing directions from a local when in a new town, such as London (from Adele) or Liverpool (from Paul McCartney) or New York City (from Madonna).

In this video clip, James Corden and Bruno Mars travel through Los Angeles and sings his hits including “24K Magic” and talk about everything from Elvis to poker.

You’ll surely guess that these two are best friends for years after watching this video clip.

They are really talented in what they are doing off the record.

Bruno Mars is the Micheal Jackson of the 21st century as some says. But, both of them have the style and moves.

Just watch the video below