Almost 100% of the state has been free from drought because one of the wettest winters that has replenished lakes, reservoirs throughout the state.

California has been officially declared drought-free for first in 7 years.

Because of an unusually abundant winter with heavy rain and snow fall, it has emerges the most beautiful flora.

“There has been an extraordinary turnaround from the dire and prolonged spells of dry weather that had been the norm in recent years in the state,” said the U.S. Drought Monitor’s latest survey.

The absolute havoc on irrigation supplies to farmers and vegetation, causing strict water restrictions throughout households have wreaked because of this same dry spells. This caused a spate of disastrous wildfires.

Not all of the state has joined in on this party. There are some parts still buttoned up and are currently labeled “abnormally dry” on the drought map index such as smallish patch of the southernmost region including the majority of San Diego County. And also the Oregon border is also still in a threatening state. 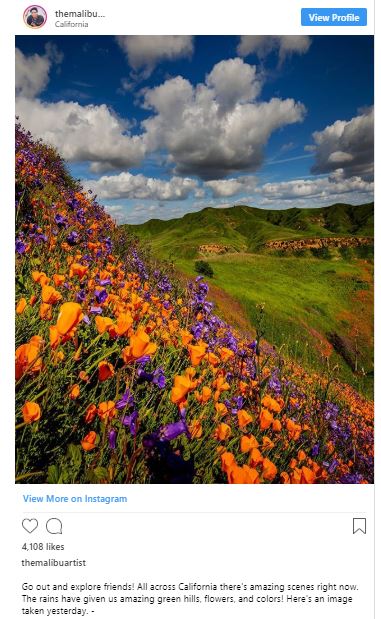 “It’s been a great winter for the West.” The California drought is officially over after more than seven years. https://t.co/ruF84zK4uW

The last winter season, one of the wettest recorded in the state was the crucial factor in all of this. Few Pacific storms have successfully replenished lakes and reservoirs and this has left the Sierra Nevada mountain snowpack with a well above normal supply of fresh surface water. According to The LA Times an approximate 580 Billion gallons of water have been added to reservoirs across state.

Jessica Blunden, a climate scientist with the National Climatic Data Center at the National Oceanic and Atmospheric Administration said that, “Reservoirs are full, lakes are full, streams are flowing and there’s tons of snow. All the drought is officially gone.”

But the snowpack levels have doubled up in February alone.

The snowpack reserve has been marked at almost zero 3 years ago.

Jerry Brown, the Governor in 2017 has since rescinded a drought declaration after record breaking rainfall.

According to the experts these swings in weather patterns are all in the era of climate change. Jessica Blunden said,“Dry conditions can easily creep back in.”

Drought conditions have much been eased throughout the region with the assistance of well above average precipitation this last winter.

The beauty of the widespread bloom and tremendous growth of vegetation is amazing. There are more residents flocking in from all over the state, because of this most beautiful flower filled meadows and rolling hills. Sue Hamel has highlighted on Twitter how after crippling fires and the driest period ever, this blessing of winter rains has led to “a gloriously display of Springtime Wild Flowers.”

“The California drought is officially OVER! CA is free of drought for the first time in more than 7 years and only a small amount of its territory remains dry as a very wet winter winds down, experts are reporting. The California bloom is real. Time to celebrate the new Spring!” added another Twitter handle by the name California Snowflake.

“If I had one good thing to say about my state (California) it would have to be our rare superbloom,” said a native of California State, Kevin Waggoner‏.

He also added: “We have just been officially declared drought free and was blessed with a superbloom we only see once every decade in a matter of a few years of the last. Yet another Twitter handle, LUVKHMER‏ wrote: Blooming season is arriving right in the yard of Angkorborie Temple in Central California. Very beautiful when ones observing closer to the flowers.”