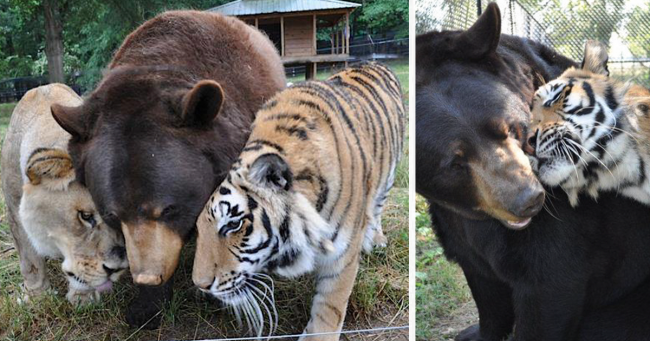 Friendship is one of the strongest bonds we develop in our lifetime. In a true friendship, there should be love, respect, and care. True friendship helps us grow, and makes us stronger.

Friends are the family. Even though we meet many people in our life the best ones remain by our side forever as friends.

Baloo the bear, Leo the lion and Shere Khan the tiger have been inseparable for almost two decades. They are living together at Noah’s Ark Animal Shelter in Georgia.

In 2001, the three were rescued during a police drug raid, after being found in the basement of a house in Atlanta. They had to face severe animal abuse and kept in the basement in terrible conditions. At the moment they were found, they were each less than 1 year old.

The trio was terrified, malnourished, and carrying internal and external parasites. Leo had an infected wound on his nose caused by being confined to a small crate.

Baloo was severely ingrown harness was digging into his flesh, because, as he grew, it was never loosened and it was in the worst condition of the three. So, he had to undergo surgery.

The three friends were separated only then, and since then, they are together every single day.

NAAS decided they couldn’t be returned to the wild as their injuries were too severe. So, they remained at the sanctuary.

According to the NAAS curator, Allison Hedgecoth time hasn’t changed the dynamics of their friendship, and “all three are still equally affectionate with one another.”

“Shere Khan has always been mischievous, and even though he is getting older this hasn’t changed him one bit.”

They have slowed down a bit as they are entering their golden years. But still, they are happily enjoying the time with each other.

Noah’s Ark Animal Sanctuary is a non-profit educational sanctuary for exotic and farm animals. They rehab hundreds of animals every year and take care of more than 1,500 animals in various categories through their Wildlife Rehabilitation Program.

Baloo the bear, Leo the lion and Shere Khan the tiger have been living together for almost two decades at Noah’s Ark Animal Shelter in Georgia

In 2001, the trio known as the BLT, was found during a police raid in the basement of a house in Atlanta

When they were found, they were kept in horrible conditions

This was the only time they were separated

The friends have spent all their days together after that

They were too injured to be rehabilitated. So, they weren’t taken back to the wild

It looks like they are enjoying life at the sanctuary

Baloo is an American Black Bear, Leo is an African Lion and Shere Khan is a Bengal Tiger

They are inseparable despite all their differences

7 Ways to Stop Yourself from Overthinking