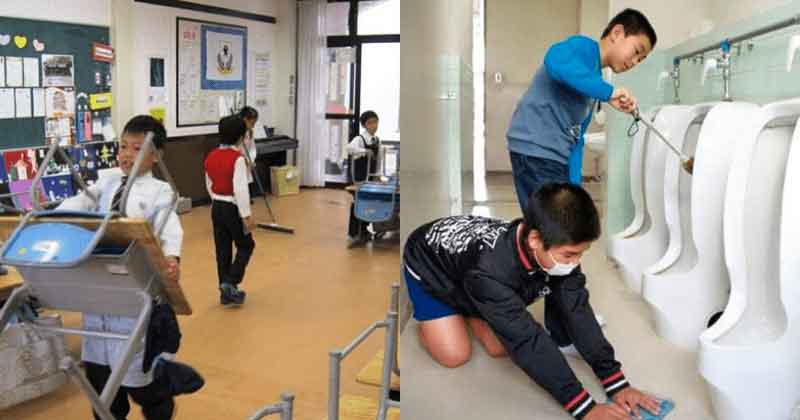 Even though there’s a maintenance staff at the school, students should clean up their classrooms and also other places in the school. This is done to inculcate discipline and cleanliness in people while they are children.

As we all know Japanese are well known for many other things. One of the most important things of all is their keen sense of duty to keep public places clean. The best example recently happen was during the last football World Cup when Japanese team won against the Columbians. They all were really happy as they had beaten a South American team for the first time in history. They could have drunken revelry and raptures. But before that they cleaned up the whole area they were seated in. This was the toast of the tournament. But this is not a big thing for them as they all are taught these manners in their schools when they are young.

According to an article in Bright Vibes, it’s called the o-soji (cleaning). It’s also a part of a tradition in the Japanese education system. This value lasts from their childhood until their death. But there are also many misconceptions on this tradition. Many think that the schools don’t hire cleaners to clean the places, but they are keeping students to do that. But this is wrong. There are people called yomushuji, or shuji in all schools in Japan who are non-teaching staff with many responsibilities such as maintenance of the school property, cleaning the premises, being guard when kids are being dropped off and picked up, etc.

They are doing this in order to cultivate sense of discipline, responsibility and care for public places and not because they are lack of manpower. This project starts after lunch for 20 minutes every day except Wednesday and Saturday. Each class members need to clean their own classrooms and they are divided into groups in order to clean the playground and library. And then they break for recess.

Interesting coincidence – listening to a story by @KatGregoryABC on @abcnews about Australia’s waste management crisis and saw these Japanese primary school students doing a cleanup outside their school. pic.twitter.com/i0LWXpy8HC

This goes for longer on the last day of each semester. The public announcement system usually blasts “the o-soji song” or some other music in order to get them pumped for the activity while the students are cleaning. Older students are helping the juniors in difficult tasks. This activity develops the connection between kids of similar ages as many Japanese families have only one child with no siblings. This activity also develops the sense of selflessness.

Japanese fans impress by cleaning up at the #WorldCup …Equipped with large rubbish bags they brought along, the fans marched through the rows picking up rubbish, to leave the place just as neat as they had found it! Yes Japan! https://t.co/8zDDiDaTYd #litterpicking #cleanup

Students of third-grade or above should also be a part of neighborhood cleanup called chiiki seiso. There are also some Japanese teenagers that not engaged in cleanliness. But the tradition still stands on a larger scale. The world should learn from Japanese and inculcate these values in their citizens when they are young.