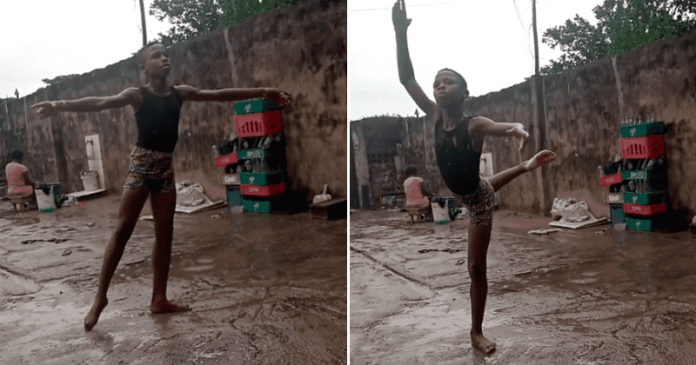 Anthony Madu gets full scholarship to be a part of a three-week intensive program by the American Ballet Theatre. He will get the chance to be training in the US next year.

Social media has become the bane of our existence. However it also has some true potential. A young boy doing ballet gracefully in the rain bare feet in a short clip went viral in social media. The internet was amazed with his swift and elegant moves. Anthony Mmesoma Madu, 11-year-old Nigerian boy was cheered by people from all over the world. The original video that was posted by Leap of Dance Academy, based in Lagos, was viewed over 330,000 times as the video clip gained traction.

Cynthia Harvey a former principal dancer with American Ballet Theatre and is currently the artistic director of the ABT Jacqueline Kennedy Onassis School of Dance, one of America’s most distinguished ballet schools told The Cincinnati Enquirer, “A friend who lives in the UK sent me the video. Within a day, I was trying to find him.” She found Anthony in two days and got in touch with his teacher. She gave Anthony a full scholarship for a three-week intensive program, the ABT virtual Young Dancer Summer Workshop.

Anthony’s teacher was also got the opportunity to take part in ABT’s National Training Curriculum, a two-week course intended to help teachers polish their skills. Anthony’s teacher is Daniel Ajala, 29-year-old, who is a self-taught ballet dancer. Ajala learned ballet with the help of YouTube and three ballet teachers from New York to Michigan to California, inspired by the 2001 film, Save the Last Dance. In 2017, he started his own ballet academy where he gives classes to his students for free. His dance studio is the living space in his house and sometimes he takes outside, which is where Anthony was recorded dancing.

Anthony told Reuters, “When I am dancing, I feel as if I am on top of the world. When my friends see me dancing, they feel like, what is this boy doing, is he doing a foreign dance? Now I have won a grand prize to go to the US … I will be in the plane and this is what I am waiting for, and ballet has done it for me.” He has got the chance to be trained in the United States next year on a scholarship from Ballet Beyond Borders. Anthony told NBC, “It makes me feel strong and happy when I’m dancing. I see my future like that I’m going to be a professional dancer when I grew up.”

Not trying to one up anyone because y’all made great points when he went viral. But the young Nigerian dancer who went viral will be virtually training w/ to American Ballet Theatre this summer & also has raised thousands for his own school, which teaches kids for free ❤️

Harvey stated, “Here, we’re complaining about not being able to open our buildings. But in that video, I saw a boy who was a perfect example of the tenacity someone can have when they have love and a dream. It was immediately obvious how much determination he had.” The dance academy reposted the small video as covered by the BBC and wrote: Changing stereotypes. In order to educate our audience that ballet is here to stay as a dance school in Africa and Nigeria to be precise our academy stands; ‘It’s for both boys and girls,’ said Anthony Mmmesoma Madu. They also praised the parents who continue to enroll boys in ballet classes.

7 Signs of a Mold Illness