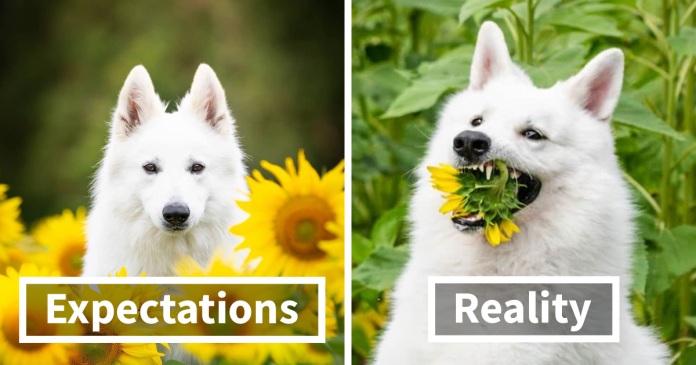 A Polish woman, Agnieszka Ciszyńska wanted to take some nice photos of her three White Swiss Shepherds in front of some sunflowers. But everything went hilariously out of the track. At the start, the dogs were happily posing like they’ve done numerous before. Suddenly, they tasted the sunflowers they were posing in front of and found them delicious! Then the photoshoot went out off the rails. But, Agnieszka managed to take some hilarious photos. She posted them on Facebook and them viral so soon.

Agnieszka said she never expected her dogs to bring so much joy to others in a recent interview with Bored Panda. “And as it turned out, people loved the result—may be in such hard times, a good laugh is what everybody needs.”

Agnieszka wanted to do a romantic photoshoot for her friends initially and then decided to take some pictures of her dogs too.

Everything was going great at first

The woman expected “dreamy, beautiful portraits in sunflowers” but later she learnt that sunflower field is quite a difficult place for a photoshoot especially if you’re not tall enough. “And as big as our dogs are—we had to think of some way to make them reach the flowers. So our friend kindly agreed to be a chair for our dogs. Then we thought that Fenris was big enough to pose on his own—but standing on his rear legs, he looked more like a hungry dinosaur than a majestic wolf… We had lots of laughs and some of the pictures came out pretty funny.”

The dogs were happily posing.

Suddenly everything changed for another good way.

The dogs decided to taste the sunflowers and found them delicious.

According to Agnieszka, the dogs are very active and friendly. They love all sorts of dog sports from frisbee to bikejoring. “They are the kind of dogs that follow you everywhere, want to be a part of everything you do (and yes, you can forget about going to the bathroom alone).”

Agnieszka husband Michał’s passion is taking photos of dogs as he’s a self-taught photographer, and she mostly takes care of the post-production.

The key to a good photoshoot is having the dogs trained to stay still when you need a portrait, and also knowing when to relax and just have fun in any surroundings.

The dog trio – Fenris, Björn, and Walkiria – regularly go on adventures all over the world.

They partake in competitions and travel all around the world with their owners. You can see more photos on their Instagram account!

The woman’s whole life is about their dogs. “There are months that we have some sort of competition every weekend—our dogs love it and are very good at it. When we relax—we relax together, when we go on vacation—we go together. Our social media is not only about nice pictures—we want everyone to remember that dogs are family and that they should be part of the most important moments in life.”

Their biggest adventure was when they spent 6 months traveling around Europe with the whole pack around a year ago. “We visited 13 countries, swam in the lakes and seas, hiked through mountains, slept on a beach in a tent, and visited big cities and places where we couldn’t find another living soul. It was sometimes challenging, but amazing and it was the best time of our lives.”