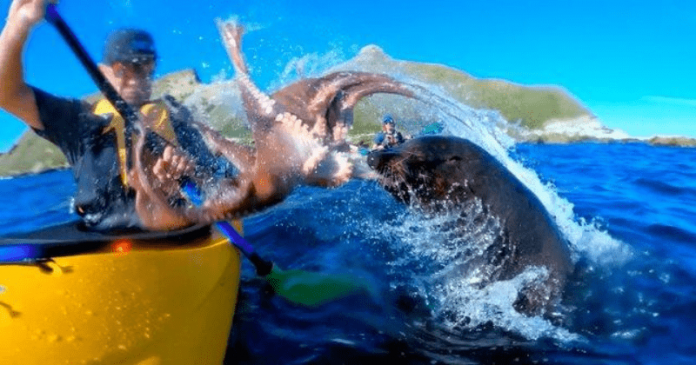 As this seal literally came out of nowhere and flung the octopus at him, it was a sucker-punch.

One kayaker went viral on internet when a seal gave him a surprise that he didn’t even think of.

Taiyo Masuda was casually paddling off the coast of Kaikoura, on New Zealand’s South Island and suddenly something amazing happened. He caught the amazing moment on his GoPro HERO7 so all of us could enjoy the incident. A seal emerges from the ocean and flings an octopus at his mate Kyle Mulinder as he was floating along with a group of kayakers. Mulinder said to Yahoo7: “We were just sitting out in the middle of the ocean and then this huge male seal appeared with an octopus and he was thrashing him about for ages.”

WATCH: A seal slaps a kayaker in the face with an octopus! The moment was captured by a team of professional GoPro-ers off the cost of Kaikoura, New Zealand. https://t.co/BdKAdBgcI6 pic.twitter.com/rA6EEZd3fo

Mulinder said that there was a fight going on between the seal and octopus and once before coming back up they actually disappeared beneath the water. Then the seal literally whips the octopus right into the astonished man’s face. He added, “He thrashed it in mid-fight and my face happened to be in the wrong place at the wrong time. I was like ‘mate, what just happened?’ It was weird because it happened so fast but I could feel all the hard parts of the octopus on my face like ‘dum dum dum.’”

Seal slaps a kayaker in the face with an octopus pic.twitter.com/F3x1fgnRE2

The octopus actually goes on to attach itself to Mulinder’s kayak instead of stopping the fight after slapping. It was a messy situation overall and they had to get it off with some help. Seals like to get straight into the action while having an intelligent mind and a deeply inquisitive nature. Countryfile reports that seals are very smart, curious, and have good coordination. It was previously said a seal coming to the rescue of a drowning dog. Some other reports say that seals often get friendly with snorkelers. They have a soft side to them as well despite what you have just seen here with the octopus.

Seal approaches a diver and hugs him tightly pic.twitter.com/mAz6V8ShXS

The US Navy has been training with seals and putting their exuberant energy to good use. War Office Productions uploaded an adorable video onto their Instagram page, captioning it: “Show ’em how it’s done”.  A group of tough US Navy officers taking part in a difficult military exercise and they are running towards the cold, grey sea. There’s an excited little seal that looks just so happy to be a part of the exercise.