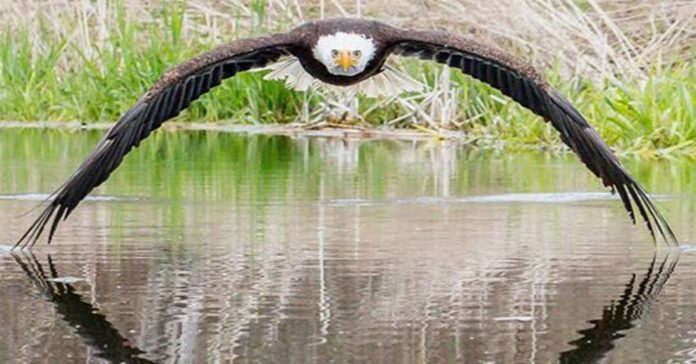 Even if nature is constantly posing for a perfect shot, it is definitely very hard to take a really beautiful and unique photo of it. We are lucky to see it, but only a few can capture it.

Sometimes everything falls into its place to get a perfect picture of the moment. A Canadian photographer Steve Biro has taken such a picture and thousands of people agreed that it is simply flawless as soon as it was posted online.

A bald eagle named Bruce, skimming the surface of a pond at the Canadian Raptor Conservatory was captured by the photographer.

The conservatory is home to over 200 captive-bred birds and regularly cares for dozens of sick and injured animals until they can be returned to the wild. Many photographers visit there to capture a perfect photo.

Biro has been photographing for about a decade. While he was taking pictures at Ontario’s Canadian Raptor Conservatory, he ran into Bruce the Bald Eagle.

He thought of taking a photo of him while flying over the water, even though the bird was not all that happy with where he was set up. It was so close to the edge of the pond, which seemed to be his territory.

Even though the eagle was flying inches over his head, Biro was determined to shoot.

According to him, it was a magnificent experience, as he felt the breeze from his wings as he flew over him. The people who were there were gasping as he came over his head.

But anyhow he captured the moment and it was spectacular.

According to him, this photograph is a bit more special than the others, as the bird is squared up perfectly, while its both wings are touching the water. The symmetry of the photo was really beautiful and he was blown away by the way the eagle was staring right through him as it looks mean and powerful.

He shared the photo on his Instagram with the caption, “So lucky to capture a symmetrical reflection of this beautiful Bald Eagle coming straight at me!”

The amazing piece of art is continually shared online, and has even made it to the front page of Reddit after Biro posted the symmetrical shot on his Instagram and to Facebook.

He thought that the image was going to be great, but never expect anything of this magnitude.

Biro was humbled and thankful by all the love, comments and likes given. It was also very rewarding and exhilarating after so many thousands of hours in the field shooting to have an image go viral worldwide.