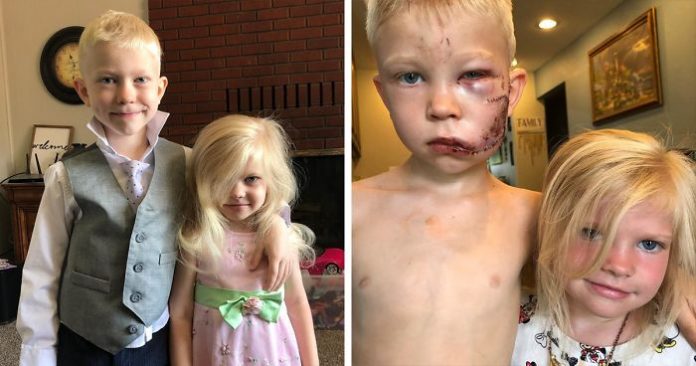 We all wish to have a brother like Bridger Walker from Cheyenne in Wyoming. He is a real-life superhero.

This 6-year-old boy saved his little sister from an aggressive dog that ran at them at a friend’s house. The dog was a 1-year-old German Shepherd mix. The dog injured Bridger when he tried to save his sister. Bridger had to get 90 stitches for his wounds. He grabbed his sister’s hand and ran with her away from the dog when the dog let him go.

Bridged said, “If someone was going to die, I thought it should be me.”

Now, Bridged is known worldwide as a superhero.

Actor Mark Ruffalo, who plays Bruce Banner and the Hulk in Marvel’s Avengers movies, Chris Evans aka Captain America sent the boy a video where he praised him for his bravery.

So, Bridger Welcome to the Avengers!

Hugh Jackman, Zachary Levi, Tom Holland, the Russo brothers, Robbie Amell, Chris Hemsworth, Anne Hathaway, and others have also shown their support for Bridger. Anne Hathaway said: “I’m not an Avenger, but I know a superhero when I see one. I can only hope I’m half as brave in my life as you are in yours, Bridger. Wishing you an easeful recovery, and many cool looking rocks.”

Here’s What People Said About The Boy’s Heroic Actions: