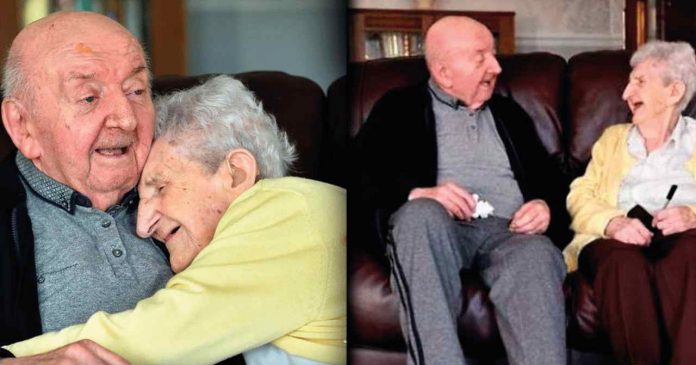 Tom Keating is a resident of Moss View, a nursing home located in Huyton, Liverpool. In 2016 due to health complications he required additional support. A year later, his 98-year-old mother decided to move to help care for her oldest child.

Mother and son are originally from Wavertree, a district of the city of Liverpool and their bond is so strong that Ada wanted to spend her last years with him. In fact, Tom never married and has always lived with his mother.

Ada’s partner and her late husband had 4 children, Tom, Barbara, Margi and Jane, who died at the age of 13. It was eight decades in which Ada was a devoted mother and the pillar of the Keating family.

The bond between parents and children is unbreakable, it is a lifelong relationship of love, commitment, loyalty and support when they need each other the most. Ada is the clear example that big gestures are not needed to show someone that you care.

Before retiring, Tom was a painter and decorator for a construction company, as well as a nurse’s aide at the old Mill Road Hospital.

Tom and Ada spend their days playing board games, chatting with the staff, and watching TV shows. Since they spend a lot of time together, they already have a routine.

“I say good night to Tom in his room every night and the next day I say good morning, I go to breakfast and then he looks for me” declared Ada.

Being a mother has no expiration date and the commitment you make from the day you are born does not go away until both cease to exist. That is why the strength that unites a family is so important, it feeds you and fills your soul.

“When he comes back, he always comes with his arms open and gives me a big hug. You never stop being a mom.”

The rest of the family visits them often and they say that they are very happy, healthy and calm. One of the employees Philip Daniels said: “It is very emotional to see how close they are and how much they share, we are very happy to be able to look after their interests in the best possible conditions.”

It is certainly unusual to see a mother and son living in a nursing home, but it is very touching to witness the love they have for each other and the way they take advantage of every moment together.