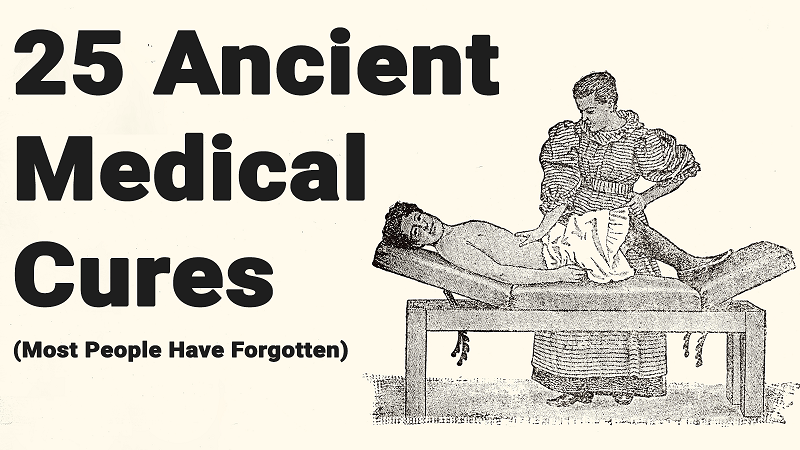 The shape of cures for disease, well-being, and human health has changed by the inventions in modern medicine. People didn’t live to see their 60th birthday about a century ago. But today, it has become a common thing for people to live longer than 80 years old.

The over-prescribing of potentially dangerous and addictive medications has become a huge issue today and many people are forced to do different things that they often don’t need.

This ancient practice has started in China; as far back as 6000 BCE. Modern medicine has started to know the effectiveness of acupuncture.

Dr. Bret Lasner, a gastroenterologist at the Cleveland Clinic says, “The Chinese were the first to recognize that changing the bacterial flora of the colon could be a beneficial treatment”.

Leech therapy has started over 3,500 years in Egypt.  Nowadays people use this method to thin the blood and improve blood circulation.

This method was used before to heal wounds. Today, this is used to treat skin trauma and soft tissue.

Doctors used to drill a hole in the skull in order to release evil spirits in the past.  But now they use surgical tools to relieve pressure in the skull.

This is done by inserting a tube in the urethra to allow an immobile person to urinate.  Because of the widespread occurrence of syphilis, kidney stones, bladder stones, and other diseases this was often used in medieval times.

This ancient practice has evolved- and for the better.  Today, about 1/3 of all babies are delivered via c- section.

Alfalfa is full of vitamins A, C, E, and K. It helps reduce symptoms of upset stomach, asthma, bleeding disorders, and arthritis.

Aloe Vera consists of vitamins, minerals, enzymes, and amino acids. It has the ability to promote skin health and nutrient absorption.

Pollen has the ability to reduce inflammation, lower cholesterol levels, promote cellular health as it has a powerful antifungal, antiviral, and antibacterial agent.

Chamomile has the ability of slowing down aging, reducing stress, and relieving the symptoms of the common cold.

Native Americans discovered the benefits of Echinacea`s benefits when they used it to boost immunity.

The active ingredient in turmeric, Curcumin, can help in treating gut-related disorders, preventing or delaying the onset of dementia.

Elderberry which is now manufactured as a tincture is mostly used to heal respiratory problems.  According to the scientific conclusions, the chemicals in elderberry relieve nasal congestion.

Sage can be used to treat digestive disorders, respiratory illnesses, including the common cold.

Rosemary has the ability to improve circulation, reduce inflammation, and boost metabolism.

Mint can relieve intestinal discomfort and promote healthy digestion. It can also positively affect brain health and function according to a recent research.

Honeysuckle is often used as an aromatherapy agent. This has the ability to treat respiratory disorders, heals digestive ailments, and promotes overall health.

China, Indonesia, and India have used this in order to sharpen mental health long ago. There is much more benefits than gingko biloba too.

Gingko is an absolute star in Chinese medicine as it improves brain health and support healthy blood circulation.