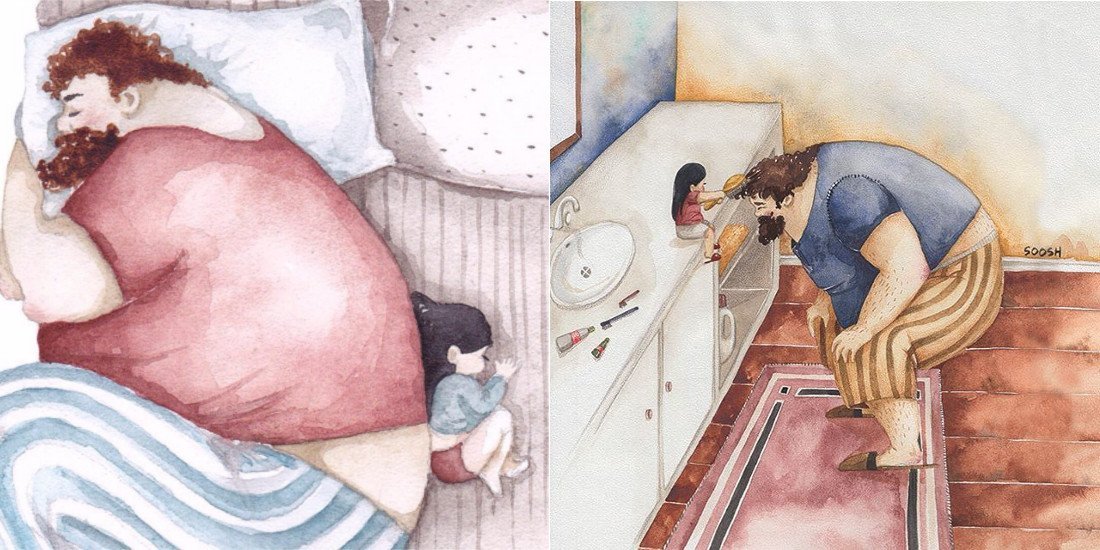 Even though he acts really tough, not any father can resist when his daughter begs him to let her do his hair. Even a father who is reserved to the rest of the world comes alive when he’s with their daughters. Not any kind of love is as pure and tender as the love a father has for his daughter.

When the world takes men seriously, they like it. Only the best of men can take themselves seriously even when they’ve got glitter all over themselves because their little girls were a tad bit too enthusiastic about giving those makeovers. They would do anything to make their daughter happy as they see the world in their daughters’ eyes.

They’ll be proud of even over the smallest thing and they’ll be there for her every step of the way of her life. When she stumbles on that road for the first time, they’ll know true fear and they’ll cherish her even more. Even though the girl gets young, she’ll always remain their little girl. But they understand that she has to fly free and fight her own battles. Even when their little girl is old and frail, they’ll never fully stop watching over her.

Soosh has depicted the wonderful bond between fathers and their daughters. You can find her work on her Instagram account as well as step-by-step videos on her Youtube channel.

These illustrations below will show you how adorable men can be for their daughter.

Every little girl believes that her father looks perfect.

• make me look handsome, kiddo• . . she loves brushing my hair.. . . you often ask me where do i take/see situations which i am drawing.. well, most of them is my life, small details that happen every step i take – this morning, for example, kiddo wanted to brush my hair and it was quite a challenge as our hair brush is one of the meanest. ?? . . #bysoosh #illustrator #illustration #jch #drawing #sketch #sketching #sketcheveryday #watercolor #watercolorsketch #watercolordrawing #big #papa #fantasy #boho #cute #father #book #inspiring_watercolors #love #art_we_inspire #inspiration #daddysgirl #kids #children #dibujo #art #artwork #365 #primitive

Even the smallest things are great fun when they are together.

The sun isn’t as powerful as her father.

But every father looks to his daughter for comfort.

He’ll learn a whole new craft to make her happy.

His choices are wise and hilarious.

A daughter learns by watching her father.

Even daily tasks can be magical.

A daughter can always count on her father to look after her.

He will always have her back whenever she needs him.

Nobody can give a hug quite like her father can.

They’ve been to Wonderland and back.

Every little girl leaves a mark on her home.

The memory of her childhood will never be forgotten.

You don’t need to look any further to find true love.