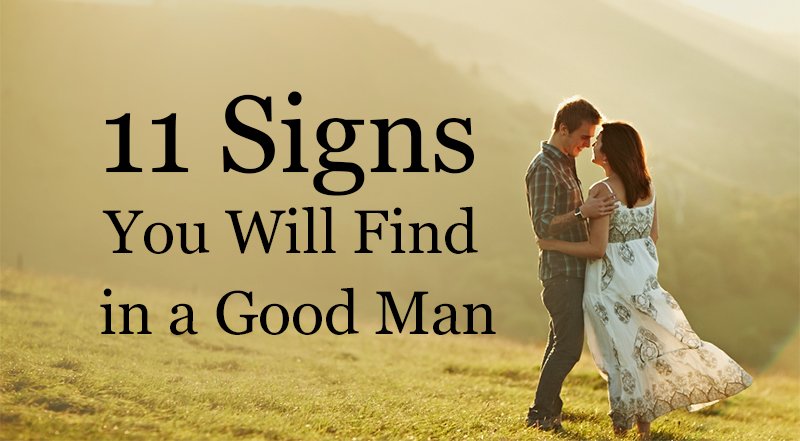 Many women say that it’s hard to find a good man as relationships and dating have always been difficult. And nowadays, they may seem impossible.

Every woman expected to marry a good man.

It’s common that we all know a good man encompass specific behavioral patterns throughout the relationship.

Eleven Signs That You Are in a Relationship with a Good Man:

1.He puts you first in each circumstance

A good man gives the priority to you in any circumstance. But, that doesn’t mean he satisfies your every whim. He is always selfless in his deeds and words.

2. He tries to earn and keep your trust

He’ll do anything to earn your trust as he knows that trust can’t be forced, it has to be earned. After he earns your trust he’ll not break it. He’ll take it as a blessing to him. He won’t leave his trust in doubt in any case.

3. He always stands by you

He’ll always stand by you and won’t neglect you in any circumstance, even if it is a hard situation. He doesn’t abandon his duty to stand by you as you are the most important person to him.

4. He isn’t abusive towards you or anybody else

He isn’t emotionally, mentally, or physically abusive to you in circumstance. Not only for, even for anybody else won’t he be abusive. He has his own strengths and character to resolve conflicts.

5. He is forthcoming and honest

The real man doesn’t lie or cheat on you. He’ll always be honest and forthcoming to you. He doesn’t be hesitated to tell you the truth, even if it is a difficult situation. Whether it’s good or bad he’ll say it directly.

6. He often does the little things

A good man is doing all the small trademark actions like feeding the children, holding the door open, or pulling out the chair. Even though he’s busy, he’ll stop what he is doing and assist you.

7. He makes you feel secure and safe

He’ll definitely secure and save you and he won’t give you a feeling that you are not safe. It’s his duty to be at your side and defend you and stands up for you in any event of something unfortunate.

8. He always tries to become the best version of himself

He always tries to self-improvement trough getting into better shape. He’ll learn something new and get more responsibilities. But he doesn’t give himself so much credit.

9. He offers accommodation and support whenever the situation calls for such

He’ll always accommodate and be supportive to you and your needs as he knows the value of it.

10. He doesn’t cease to evoke feelings of inspiration

He is an unshakable and strong person. He doesn’t cease to evoke feelings of inspiration. So, he is a frenzy in his deeds and words and also he motivates you to be the best version of yourself.

11. He makes you feel beautiful

He makes you feel beautiful not only by words but tries to manifest feelings of beauty in your heart by interacting with you mentally and physically.

This article and its content are copyright protected. Please do not republish without receiving prior consent from the author. Thank you.

Without His GF Noticing, A Boyfriend Puts Engagement Ring In Front Her As Many Times As He Can